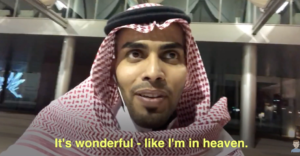 In particular, Saud noted that he had grown up believing that Israeli Jews and local Arabs did not at all get along, and the image portrayed by the mainstream media only reinforced that belief.

But while here in the Land, Saud said he discovered a very different reality.

“For those people who hate Israel,” Saud concluded, “I would like you to think deeply, and I invite you to come and visit Israel. You will find a different experience. You will find that most of the propaganda and the bad media about Israel is not true.”

To be more transparent about Mohammed Saud’s trip to Israel, he was abused, physically and verbally while walking through Jerusalem’s Old City, and then spat at repeatedly by the local Arabs as he visited the Temple Mount.

According to the Israel Police, 3 Palestinians were arrested the following day for their assault of the Saudi journalist while in Jerusalem.

The attack wasn’t a surprise, because it was obvious a visiting Saudi journalist would later report what he saw…the truth, and not the ‘Palestinian narrative.’