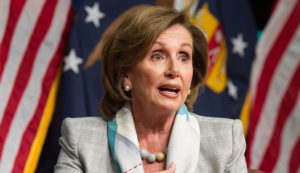 Tlaib, one of two Muslim women who were recently elected to Congress, came under fire after she claimed that Palestinian Arabs living in the British Mandate prior to the establishment of the State of Israel “provided” a safe haven to Jews after the Holocaust.

Tlaib said in an interview with Yahoo!’s Skullduggery podcast program that she felt pride in the fact that her “ancestors, Palestinians” provided Jews with a haven after the Holocaust.

“Let me tell you, I mean, for me, just two weeks ago or so, we celebrated, but just took a moment I think in our country to remember the Holocaust,” she added.

Pelosi’s comments came after House Majority Leader Steny Hoyer (D-MD) came to Tlaib’s defense and asserted that the Republicans were twisting her words in criticizing them as anti-Semitic.

“If you read Rep. Tlaib’s comments, it is clear that President Trump and Congressional Republicans are taking them out of context,” Hoyer said in a brief email. “They must stop, and they owe her an apology.”

On Monday, Trump accused Tlaib of anti-Semitism in the wake of her comments.

“Democrat Rep. Tlaib is being slammed for her horrible and highly insensitive statement on the Holocaust. She obviously has tremendous hatred of Israel and the Jewish people. Can you imagine what would happen if I ever said what she said, and says?” he tweeted.

MK Michal Shir (Likud) responded on Sundayto Tlaib’s claim that Palestinian Arabs had “provided” a “safe haven” for Jews after the Holocaust, saying the congresswoman should “open up a book” and study the history of the Middle East.

– She insinuates how Palestinians welcomed Jews after the Holocaust. The opposite is the truth. Palestinian leader, Amin al-Husseini worked with the Nazis, helping Hitler form Muslim Nazi unites and hoped to bring their ‘Final Solution’ to the Mandate once England lost the war.

In the meantime he successfully pressured the Brits to return back to Europe escaping Jewish refugees that found safety in the mandate.

– She also made it sound as if ‘her people’ helped make Israel a Jewish State, and at the personal expense of “Palestinians.”

Well, we know that over 500,000 Arabs came to the mandate during the war years to work FOR the Palestinians [Jews!] and the English as cheap migrant laborers, seeking a better life not found in neighboring Arab states.

For those who didn’t catch her fabrication of history, which she outrageously spun to make her, her family, and her so-called ‘people’ appear as victims, please read this detailed (not too long) explanation of who the Palestinians are:

The Palestinian history of a politically invented ‘people’