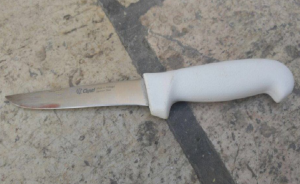 Praising the Palestinians for carrying out their lethal attacks against Israeli civilians in Al-Qaida’s English-language magazine, ‘Inspire,’ the Islamist group says its followers must now strike in the West, “particularly America in their own backyard.”

Al-Qaida praised Palestinians carrying out attacks against Israelis Saturday and called for its followers to carry out similar attacks in the United States in the latest issue of the Islamist group’s English-language magazine “Inspire.”

Kay Wilson, survivor of 2 women brutally attacked while hiking, was saved after being left for dead by their 2 Palestinian knife attackers – Photo: Twitter

In an article titled “Let us Unite for Palestine” the group says “blessed be the hands of the Mujahid that are defending Palestine and al-Aqsa with knives, cars, rocks and everything they have.”

It then continues to claim that in order to “liberate Jerusalem and Al-Aqsa Mosque”, its followers must strike the West, “particularly America in their own backyard.”

“Supporters of Israel should pay with their blood and their economy the price for their support for Israel’s crimes against Islam and Muslims,” the author writes.