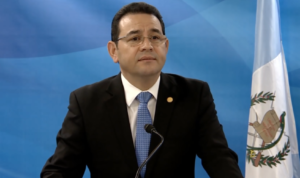 The Secretary-General noted that the Arabs had expected that Guatemala, like the Arab states, would seek to value their friendly bilateral cooperation in the political, economic and cultural fields and uphold international law and justice embodied in “the legitimate rights of the Palestinian people”, Afifi said.

He added that Aboul Gheit pointed out in his letter that the Arab League remains willing to maintain the existing friendly relations with Guatemala and to avoid any actions that could affect the future of these relations.

The Secretary-General urged Guatemala to retract its decision to move its embassy to Jerusalem.

Morales confirmed at the AIPAC Policy Conference earlier this week that his country will move its embassy in Israel to Jerusalem on May 16, two days after the United States moves its embassy to the Israeli capital.

On December 24, days after U.S. President Donald Trump recognized Jerusalem as Israel’s capital, Guatemala became the first country to follow suit and announce it would be moving its embassy to Jerusalem.

On Tuesday, Guatemalan Foreign Minister Sandra Jovel defended her country’s “sovereign” decision to relocate its embassy in Israel from Tel Aviv to Jerusalem.

“We are doing the right thing in accordance with the foreign policy that Guatemala has had toward Israel over the past 70 years,” Jovel said.

The move is “a sovereign decision of Guatemalan foreign policy,” she stressed.