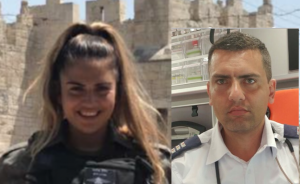 A peaceful Friday evening was interrupted with the voice of the Shift Officer at MDA’s 101 dispatch center who announced a stabbing attack had taken place at the Nablus Gate in Jerusalem. Seconds earlier, three terrorists attacked a Border Police force patrolling the area. One of the terrorist, who was only 18 years old, began stabbing policewoman Hadash Malka, critically injuring her, but Malka didn’t give up and fought him back extensively. When her squad members realized what was going on, they immediately shot the terrorist and called MDA to the scene.

Mohammed Abed al-Rahman, a veteran paramedic at MDA’s Jerusalem station has already tended to dozens of terror attacks in his career, but he knew this one was different and more severe. “I was manning a Mobile Intensive Care Unit in Pisgat Ze’ev. When we arrived at the Begin junction, a short drive from the scene, we received a report from the MDA Jerusalem dispatch center about a Police request to deploy an ambulance to Nablus Gate after noticing security camera footage showing a person stabbing a policeman who was laying on the ground. Initially, we didn’t know it was a policewoman. The shift officer, Noam Tiram, immediately deployed an ambulance to the scene. Shortly thereafter it was clear that this was a terror attack. Seemingly, an ongoing attack, and I immediately offered myself as a first responder as I was very close to the scene.

We immediately left for the scene and heard from the dispatch center that the incident was ongoing but at the moment, it was unclear what was going on. Initially, it was suspected as a criminal incident. Seconds later it was already reported as a terror attack. We were instructed to armor ourselves, group with police forces and instruct youth MDA volunteers to remain inside the ambulance. I reported to the dispatch center and learned that I would be first to arrive on the scene, and that five additional ambulances were to follow.”

Hadas Was Bleeding and Unconscious

The encounter with Hadas reminded Mohammed of previous terror attacks at Nablus Gate, in which he also treated victims in critical condition. “When I arrived on the scene I noticed a standard ambulance that reported on evacuating a patient in severe condition to Hadassah Mount Scopus Hospital, and we decided to group at Nablus Gate near the scene of the attack and transport the patient to our Mobile Intensive Care Unit in order to provide her with medication and advanced lifesaving procedures during the evacuation. When I opened the door I noticed a combat Border Policewoman, 23, wearing a vest and flak jacket. She was unconscious. I conducted a preliminary situation assessment and noticed stabs in her upper body. She was bleeding massively. Following a thorough checkup of her wounds I understood that I was operating against the clock and began intensive treatment.”

When Reports of Additional Terrorist on the Scene Began Coming in, Were You Anxious?

“When I accept a patient with wounds at such a severe degree I am only concerned with her, and not with the reports. I didn’t even hear of the warning that there were additional attackers on the scene, and it didn’t matter to me as I sensed an obligation to treating Hadas. At that time I was only with her, I conducted surgical procedures on the field in order to release the pressure in her chest as well as treated her other injuries to prevent loss of blood.

I instructed my team to begin resuscitation. We began conducting chest compressions physically. Another volunteer laid over the wound in her neck in an attempt to halt it from bleeding, another volunteer conducted compressions and I was kneeling over her, conducting intubation, while opening up a vein in her neck in order to hydrate and stabilize her.

In only seven minutes we were able to provide her with the utmost preliminary medical treatment on the field using advanced gear including surgical treatment, artificial respiration, medication, and more, while speeding to the hospital.”

We Were Hopeful That She Would Make It

The team arrive with Hadas at the hospital and immediately entered the trauma room. Mohammed’s team members joined the doctors who fought for her life and he treated her until her last moments. “There were barely any moments of optimism, when we arrived at the hospital and brought her into the trauma room, the happiness was premature because her condition deteriorated and became critical.

We continued with the compressions constantly, we provided her with more blood transfusions and medication treatment but ultimately, we had to pronounce her dead an hour after her arrival at the hospital. We fought for her life, all of us, the MDA team and the Hadassah team. The moment in which we pronounced her dead was difficult for all of us.”

Mohammed’s team remained in the hospital until Hadas’ family learned of her passing. “Only after the incident concluded and we were released from the hospital I heard on the news that it was an incident with two scenes and three perpetrators who stabbed and shot the victims. Only then we learned how grave the incident was.”

Today, Mohammed shares: “Many times we enter scenes of ongoing incidents and treat patients under danger. In these moment we operate with a sense of mission and with a single intention at hear – saving the patient. We don’t think about what’s to come, and not about what could happen to us. Anytime we see a scene of terror attack we run and leap in, other people’s common logic says ‘run away’. But this is us, and that’s we know and ought to do.”