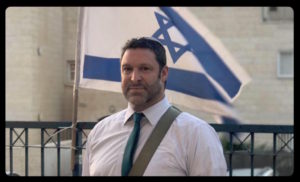 “I want to send my sincerest condolences to the Fuld family, to the residents of Efrat and all of Gush Etzion over the shocking murder of Ari Fuld,” said President of Israel Reuven Rivlin. “No one will resist terror so forcefully as Ari, who displayed exceptional courage and fought until the last moment — we too will pursue by any means the perpetrators of this attack.”

Prime Minister Benjamin Netanyahu likewise praised Fuld’s heroism. “With his last strength Ari fought heroically against the terrorist and prevented a graver tragedy,” Netanyahu said. “He was an outstanding father to four children who fought for the truth on the side of Israeli hasbara.”

US Ambassador David Friedman expressed condolences to the Fuld family in a tweet, saying that “America grieves as one of its citizens was brutally murdered by a Palestinian terrorist.”

Fuld, Friedman wrote, “was a passionate defender of Israel and an American patriot. He represented the best of both countries and will be deeply missed. May his family be comforted and his memory be blessed.”

Fuld was a father of four and a dual US-Israeli citizen. He served as a sergeant in an elite paratroopers unit in the IDF reserves and also served on the Efrat emergency squad.

His Facebook page states: “Living the dream! I have a love for the Nation of Israel, Land of Israel and Torah of Israel.”

Well-known in Jewish communities around the globe, Fuld was assistant director of Standing Together, an organization that supports IDF soldiers, according to his personal website. He was an outspoken defender of Israel in the media and online, regularly engaging with Israel’s critics through his Facebook and Twitter accounts.

According to his personal website, Fuld was about to launch a new Israel advocacy website in English.

He held a fourth level black belt in karate and had taught the martial art to hundreds of children in Efrat.

Ari’s brother, Hillel Fuld, a well known hi-tech guru, wrote on his Twitter account, “He lived as a hero and died as a hero. My big bro is gone. Thanks for the messages. Really. Just looking for oxygen now.”

Thanks for the messages. Really. Just looking for oxygen now…https://t.co/uupt1nQGIP

A second brother Eytan, is the spokesperson for MK Bezalel Smotrich (Bayit Yehudi).

“The entire People of Israel is pained at the shocking murder of Ari Fuld this morning in Gush Etzion,” Knesset Speaker Yuli Edelstein wrote in a Twitter post. “Ari demonstrated rare courage, pursued the terrorist but unfortunately his strength did not last.”

Deputy Defense Minister Eli Ben-Dahan lauded him as a hero, and MK Moti Yogev (Bayit Yehudi) said that Fuld was a warrior in death and in life. “Just as he fought during his lifetime to honestly portray the people of Israel, so too in his death, Ari overcame his murderer in order to prevent further harm to civilians.”

Peace Now and the New Israel Fund both published statements expressing their sorrow over Fuld’s murder.