News of the agreement between Liberman and Netanyahu was first reported by Ben Caspit, the senior political commentator for The Jerusalem Post’s Hebrew-language corporate sister publication Ma’ariv.

“The meeting was business-oriented and it was held in a positive atmosphere,” the Likud said in a statement. “The prime minister is updating the heads of the coalition partners on the details.”

Netanyahu and Liberman are trying to bridge the remaining gaps separating the two sides from coming to agreement on the latter’s entry into the coalition.

In order to entice Liberman to join the government, Netanyahu offered to name him defense minister while also offering his party the immigrant absorption portfolio. Liberman has accepted the offer, and further talks are considered a mere formality.

Earlier on Wednesday, a Hebrew-language Internet news report said that Netanyahu was expected to dismiss Ya’alon from his position as defense minister in order to pave the way for Liberman. 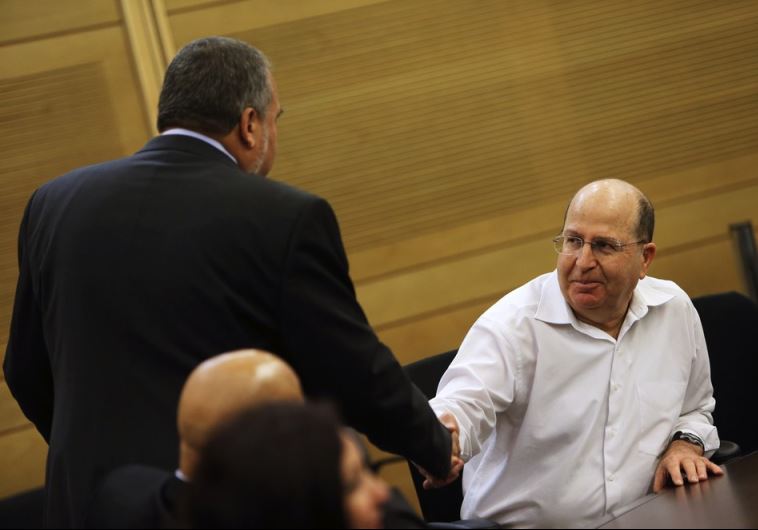 The report by the Walla! news site, which said that Netanyahu has kept Ya’alon abreast of the latest developments, was denied by aides to both Netanyahu and Ya’alon.

The Netanyahu-Liberman meeting comes after Liberman said in a press conference earlier on Wednesday that he was prepared to enter the coalition if he was given the defense portfolio and promised government support of legislation to implement the death penalty for terrorists, among other demands.

News that Netanyahu was holding coalition negotiations with Liberman angered Zionist Union leader Isaac Herzog, who had been mulling a possible entry into a unity government with Netanyahu.

Herzog said Wednesday that Netanyahu can’t negotiate with both Zionist Union and Yisrael Beytenu at the same time, and must choose between “madness and sanity.” “Until [Netanyau] decides, we will not conduct parallel negotiations, I do not work according to Liberman’s schedule, I go with my terms,” Herzog said at a press conference at the Park Hotel in Jerusalem.

His remarks came after Liberman’s press conference at the Knesset.

“If Netanyahu wants to join the coalition with Liberman he can, we will dismantle the opposition, and if he respects the demands we will join,” Herzog said.

“The decision is between the crazy and the sane, between prosperity and political siege. I understand why the Right is stressed, I listened to [Egyptian President Abdul Fatah] Sisi yesterday, we have a historic chance for a tremendous development. The responsibility currently falls on Benjamin Netanyahu,” Herzog added.

The move is seen as another attempt by the premier to expand his coalition, which currently comprises a slim majority of 61 MKs.

Liberman denied a report that he met last week with Netanyahu and that the prime minister offered him the defense portfolio and support for key Yisrael Beytenu-sponsored legislation. He said he heard such offers only from the press and “self-appointed mediators” who did not represent Netanyahu.

“If the defense portfolio, pension reforms, and the death penalty bill are truly on the table, there is what to talk about,” Liberman said. “But we won’t talk in the middle of the night. The offers must be official and on the table. The prime minister has my phone number.”

Liberman appeared to backtrack on demands he made in a March 21 press conference on matters of religion and state following an appeal by Shas leader Arye Deri to join the coalition. He listed 30 demands at the time, including drafting more yeshiva students and allowing the recognition of civil unions.

“We don’t intend to whitewash the entrance of the Zionist Union to the coalition,” Liberman said. “We know we can’t get 100% of our demands. We realize the haredim are part of the coalition. We were part of governments with the haredim (ultra-Orthodox) before.”

Liberman appeared to give another reason for his interest in joining the government when he said his party would not support Joint List head Ayman Odeh becoming the head of the opposition. The key post and the regular security briefings that come with it could go to an Arab MK for the first time if the Zionist Union enters the coalition, instead of Yisrael Beytenu.

Asked about his recent statement calling Netanyahu “a liar, cheater, and crook,” he said “With all due credit to personal issues, they aren’t relevant.” Likud minister Ze’ev Elkin immediately responded by calling upon Netanyahu to conduct expedited coalition talks with Yisrael Beytenu.

Levin spoke as if Yisrael Beytenu joining the coalition was only a matter time. “The great effort we have made for months to bring Liberman to truly consider entering the government and bringing six mandates back to the Right has succeeded and I welcome it.”

Levin said that the government “intends to hold real and quick negotiations in order to conclude the matter without delay.”

There was never a justification for Yisrael Beytenu not to be in the government, he said. “This can be finished in a matter of hours in order to establish a stable, nationalist government that will stand up for its principles in the name of the voters.”

Transportation Minister Yisrael Katz also welcomed the possible entry of Yisrael Beytenu into the coalition, saying that the party was “a natural partner for a nationalist government led by the Likud.”