14th European Maccabi Games hosted 2,322 Jewish athletes from all over the world in Berlin for largest Shabbat Dinner ever.

The European Maccabiah set a new Guinness world record – and it had nothing to do with sports.

2,322 Jewish athletes from all over the world set a new Guinness world record for the biggest Shabbat dinner during the 2015 Maccabiah Games in Berlin July 31, 2015 – Photo: i24news/Polina Garaev

2,322 athletes participating in the games taking place in Berlin and guests of the Maccabi organization who gathered on Friday at the largest hotel in Germany, broke the record for the largest Shabbat dinner. The previous record, of 2,226 dinners, was set only a year ago in Tel Aviv.

The count was done carefully, with numbered bracelets given at the door to every participant in the feast. However, the dinner itself was less organized. “Balagan, it’s one big mess,” admitted members of the planning committee shortly after the event began, when it became clear that the meticulously crafted seating chart was treated merely as a recommendation, and when the Estrel hotel’s staff was forced to pull out additional tables and plastic plates and cutlery.

“People are complaining, but they are still having fun. It’s a Jewish thing,” assured the organizations, mostly amused by the chaos. As the evening progressed, they themselves took over the job of the waiters who circled the room offering to refill wine glasses, and started handing out vodka shots instead. 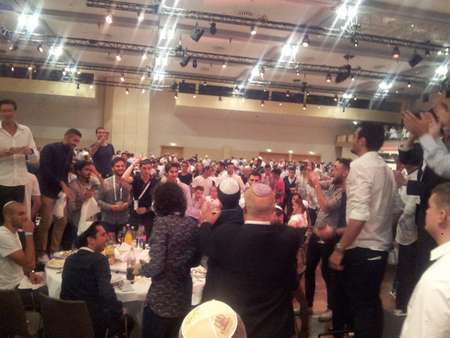 2,322 Jewish athletes from all over the world set a new Guinness world record for the biggest Shabbat dinner during the 2015 Maccabiah Games in Berlin July 31, 2015 – i24news/Polina Garaev

The initial entertainment was provided by a group of rabbis standing on a little stage in the middle of the room and singing “Mashiach, Mashiach,” but quickly the participants themselves assumed the role: The Israeli delegation was the first to get up on their chairs, singing in Hebrew: “And the most important thing is never to give up,“ and soon they were followed by the Dutch, Swiss and the South African athletes, who took turns competing who can sign his national anthem the loudest.

The 14th European Maccabi Games were marketed in Berlin as a family event, “for the entire Mishpocheh”, and that was clearly the theme of the night. “We are all distant cousins,” declared a member of the Italian delegation, while sharing a drink with a fellow French athlete. The opportunity to play matchmaker also didn’t go unnoticed by the organizers, one of whom said that “even my non-Jewish friends wanted to be here, for the opportunity to meet some cute boys.”

All are welcome here, was the message repeated more than once, and so even a table full of German military officers did not seem unusual to most people. “Two of them volunteered to help us logistically and they asked to bring some friends to the dinner,” explained the organizers to the few who wondered. 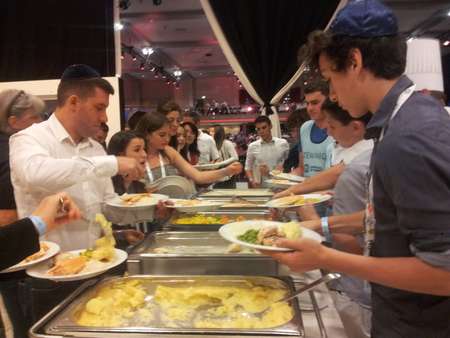 2,322 Jewish athletes from all over the world set a new Guinness world record for the biggest Shabbat dinner during the 2015 Maccabiah Games in Berlin July 31, 2015 – i24news/Polina Garaev

The dinner itself included dishes like chickpea salad and gefilte fish as starters, with salmon and chicken breast for the main course – strictly kosher food. The hotel’s kitchen prepared a whole year for the transition from its usual menu and cooking process, even marking its dishes with colored dots for meat (red), dairy (yellow) and neutral (green), all to meet the requirements of the Mashgiach, the kosher inspector. “I want to prove that Kosher food can also taste good,” the head chef professed his mission statement.

Not only the kitchen had to make adjustments. Although the Estrel has 1,125 rooms, additional beds needed to be brought in to accommodate all the guests, with some of the VIP’s even relocated to another hotel. Also, those how stated there are Shomer Shabbat, like the entire French delegation, for example, were sent to another wing of the hotels, where real keys are used and not electronic access cards.

On Saturday the athletes were offered to participate in a variety of lectures and workshops at the hotel, ranging from talks about the connection between sports and Judaism to Latin dance lessons, but even the organizers don’t expect many to take part. The athletes, who until now were mostly transported from the matches at the Olympic Park to the hotel on the other side of the city in police-escorted buses, are more likely to spend their weekend with the tourists swarming the city.

“This is my first time in Berlin,” said a young field hockey player from Argentina, “I plan to find out what the whole fuss is about.”