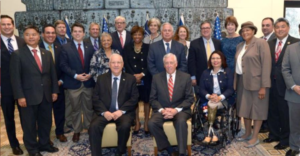 A part of this wing – embodied by congresswomen Ilhan Omar, Rashida Tlaib and Alexandira Ocasio-Cortez – despises Israel and AIPAC with a venom that sometimes crosses the line into antisemitism. And two organizations identified with this flank of the party – the radical groups Code Pink and IfNotNow – waged a high profile campaign to get the congresspeople to boycott the trip.

They wrote letters, organized petitions and created a Twitter hashtag called #Skipthetrip where they urged US Congress members to shun the “2019 AIPAC Junket to Apartheid Israel.”

The trip, which takes place in August of every non-election year, is geared to give freshmen representatives a first-hand look at Israel and the complexity of the issues here. One freshman congressman after the next heeded House Majority Leader Steny Hoyer’s call – and that of House Democratic Caucus Head Hakeem Jeffries – to join the trip, and on Monday 17.5% of all House Democrats arrived in Israel.

“This is significant,” said former US ambassador to Israel Dan Shapiro. “There is no question that this trip has a certain symbolic importance. And the fact that Hoyer is leading it, is an indicator of where the Democratic leaders are – and that the vast majority of freshman are of a like mind, and are not in any way dissuaded from participating.”

Shapiro, who served as ambassador from 2011 through 2017, said that this trip tells him that the “mainstream position [on Israel] within the Democratic Party, at least among office holders, is quite similar to what it has been – which is strong support for the US-Israel relationship, for Israel’s security, for a two-state solution and for active US efforts to achieve one.”

This trip is coming fast on the heels of anti-BDS bill that passed the House last month by a walloping vote of 398-17, with only 16 of the 235 Democrats in the House voting against it. [H. RES. 246 is posted below – IsraelandStuff]

While Omar, Tlaib and Ocasio-Cortez were the prominent names who did vote against the measure, Shapiro said that “the fact that they were in such a small minority suggests that their positions [on Israel] are not mainstream at all in the party.”

Former MK Michael Oren, who served as ambassador to the US from 2009 to 2013, said that it was “very impressive” that so many Democrats came on this trip.

“I think this is the pro-Israel stream in the Democratic Party, which is the mainstream of the party, reasserting itself and saying that while we respect the grassroots in our party, they can’t speak for us, particularly not on Israel,” he asserted.

Oren said that given all the noise surrounding the trip – the circumstances and the timing – Israel should go out of its way to “express our appreciation to what Hoyer and the other representatives are doing.”

Asked what he had in mind, he replied: “Give them quality time and access to Israeli leaders – to the prime minister, to the heads of our intelligence and military services. We should use this opportunity to show Israel as the country that embodies many of the same values that liberal Democrats uphold. There is just a tremendous amount of misinformation out there.”

Israel, he said, needs to show the representatives that the country is a “multi-ethnic, multi-racial, multi-religious democracy” where inside the Knesset “all the political, religious and ethnic identities get into a room and scream at each other, safely – and even sometimes get things done.”

Former MK Michael Oren (Kulanu), who previously served as Israel’s ambassador to the US from 2009 to 2013  – Photo: Anne Mandlebaum, Wikimedia

The arrival of such a large delegation now, Oren said, was a defeat for organizations such as Code Pink and IfNotNow, and that “in many ways, these Democrats see correctly that the fight over Israel in the party is… a fight over the party’s soul.”

According to the former ambassador, this trip could have far-reaching influence on the conversation among the Democratic presidential candidates when their televised debates begin to move from domestic policy to foreign policy and Israel.

“It will be interesting to see how this delegation impacts the answer to the Israel question,” he said. “The candidates are now seeing that there are other voices out there [on Israel] other than Omar and Tlaib.”

Evil at work: Arguing against the anti-BDS Resolution.

Whereas the democratic, Jewish State of Israel is a key ally and strategic partner of the United States;

Whereas since Israel’s founding in 1948, Congress has repeatedly expressed our Nation’s unwavering commitment to the security of Israel as a Jewish and democratic state;

Whereas American policy has long sought to bring peace to the Middle East and recognized that both the Israeli and Palestinian people should be able to live in safe and sovereign states, free from fear and violence, with mutual recognition;

Whereas support for peace between the Israelis and Palestinians has long-standing bipartisan support in Congress;

Whereas it is the long-standing policy of the United States that a peaceful resolution to the Israeli-Palestinian conflict should come through direct negotiations between the Government of Israel and the Palestinian Authority, with the support of countries in the region and around the world;

Whereas it is a hallmark of American democracy for citizens to petition the United States Government in favor of or against United States foreign policy;

Whereas cooperation between Israel and the United States is of great importance, especially in the context of rising anti-Semitism, authoritarianism and security problems in Europe, the Middle East, and North Africa;

Whereas the Global Boycott, Divestment and Sanctions Movement (BDS Movement) targeting Israel is a campaign that does not favor a two-state solution and that seeks to exclude the State of Israel and the Israeli people from the economic, cultural, and academic life of the rest of the world;

Whereas the BDS Movement targets not only the Israeli government but also Israeli academic, cultural, and civil society institutions, as well as individual Israeli citizens of all political persuasions, religions, and ethnicities, and in some cases even Jews of other nationalities who support Israel;

Whereas the BDS Movement does not recognize, and many of its supporters explicitly deny, the right of the Jewish people to national self-determination;

Whereas university-based BDS efforts violate the core goals of the university and global cultural development, which thrive on free and open exchange and debate; and

Whereas the BDS Movement promotes principles of collective guilt, mass punishment, and group isolation, which are destructive of prospects for progress towards peace and a two-state solution: Now, therefore, be it

Resolved, That the House of Representatives—

(1) opposes the Global Boycott, Divestment, and Sanctions Movement (BDS Movement) targeting Israel, including efforts to target United States companies that are engaged in commercial activities that are legal under United States law, and all efforts to delegitimize the State of Israel;

(2) affirms that the Global Boycott, Divestment, and Sanctions Movement undermines the possibility for a negotiated solution to the Israeli-Palestinian conflict by demanding concessions of one party alone and encouraging the Palestinians to reject negotiations in favor of international pressure;

(3) urges Israelis and Palestinians to return to direct negotiations as the only way to achieve an end to the Israeli-Palestinian conflict;

(4) supports the full implementation of the United States-Israel Strategic Partnership Act of 2014 (Public Law 113–296; 128 Stat. 4075) and new efforts to enhance government-wide, coordinated United States-Israel scientific and technological cooperation in civilian areas, such as with respect to energy, water, agriculture, alternative fuel technology, civilian space technology, and security, in order to counter the effects of actions to boycott, divest from, or sanction Israel; and

(5) reaffirms its strong support for a negotiated solution to the Israeli-Palestinian conflict resulting in two states—a democratic Jewish State of Israel, and a viable, democratic Palestinian state—living side-by-side in peace, security, and mutual recognition.