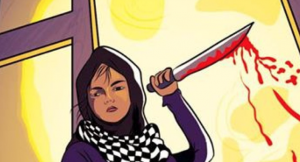 Israel’s Public Security Minister notes that while male Palestinian terrorists “do what they do because they were promised 72 virgins,” there is now a new phenomenon, where several female terrorists sought death hoping to get good-looking male terrorists in Paradise.

Public Security Minister Gilad Erdan on Wednesday revealed a new phenomenon, of female Palestinian terrorists who say they want to become shahids (martyrs) so as to meet good-looking male shahids.

“There is now a new phenomenon: Once upon a time the [male] terrorists would do what they do because they were promised 72 virgins were waiting for them,” Erdan said.

“Now there have been a few terrorists who look so good, like Fadi Elon [the 19-year-old who was killed after stabbing a 15-year-old boy in Jerusalem], that the female terrorists who have been apprehended have admitted during their interrogations that they want to meet him in heaven.”

The public security minister also noted the use of Facebook by Palestinians as a tool for incitement.

“I read the texts of some of the terrorists that were caught, and they’re unbelievable,” he said.