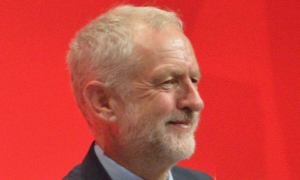 Dedicated to aiding & supporting Israel’s enemies at all cost, and completely disregarding the US assessment to terminate the folly of endlessly funding an exponentially expanding parasitical community, the UK Labour leader calls on Britain to “fill the gap by boosting its contributions.”

The UN Relief and Works Agency for Palestine Refugees in the Near East (UNRWA) supports roughly five million Palestinians in Jordan, the West Bank and the Gaza Strip.

Shameful for the US to end its funding for UNRWA, a vital UN refugee agency. The UK must help to fill the gap by boosting its contributions.

Support for Palestinian refugees is a vital commitment until there is a just and viable settlement of the Israel-Palestine conflict. https://t.co/vHVKjqxmeB

Corbyn further stated that the “UK must help to fill the gap” left by contributing more to the agency.

The State Department said that the US has decided to end all funding for UNRWA and described the agency as “irredeemably flawed.”

The Palestinian leadership is currently considering going to the UN General Assembly and Security Council to encounter the US administration’s decision, said Palestinian Authority presidential spokesman Nabil Abu Rudaineh during an interview with the Jerusalem Post.

He explained that the UNRWA’s fixed determination of who is a Palestinian refugee is “one of the main problems perpetuating the conflict.”

According to UNRWA, the refugee status for Palestinians is given to children and grand-children of those who left or were forced to leave the country during the Israeli War of Independence, a situation unlike all other refugees in the world.