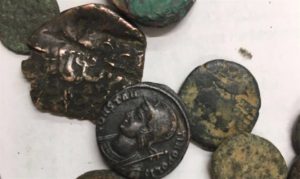 After the customs officer asked the suspect to empty his pockets, he noticed the suspect’s coat contained something heavy.

Some of the smuggled coins – Photo: Alleby Customs Authority

A search of the coat revealed a bag of 53 old coins, dating from the 100 BCE to the thirteenth century CE.

Judea and Samaria Police arrested the suspect and turned him over to the Civil Authority’s Archaeological Division.

“These findings represent 1,400 years of regional history, from the ancient Roman period to the Mameluke period during the 13th century BCE. I am happy to see the continued cooperation between the relevant authorities, and am glad we have prevented someone from stealing a piece of everyone’s history,”said Civil Authority Archaeological Division Vice Chief Benny Har-Even.