The Association for Civil Rights in Israel and east Jerusalem residents appealed to the High Court of Justice on Tuesday, petitioning against the lack of running water in several neighborhoods east of the security barrier for the past three weeks. 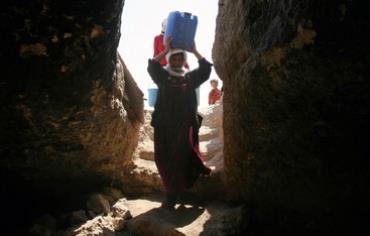 Most homes in the neighborhoods of Ras Hamis, Ras Shahada, Dahyat a-Salam and the Shuafat refugee camp have either had no water or very low water pressure, ACRI attorney Keren Tzafrir wrote in the petition. Tens of thousands of residents have needed to buy bottled water or large containers of water during these weeks, according to ACRI.

“These are residents of Jerusalem, totally under the responsibility of the municipality and the government,” Tzafrir said. “The separation barrier that cuts these neighborhoods off from the rest of the city does not in any way absolve the authorities of their failures.”

The petitioners have demanded that the National Infrastructure, Energy and Water Ministry, the Water Authority, the Jerusalem Municipality and Hagihon – Jerusalem Water and Sewage Industries take all the necessary measures to ensure that Hagihon resumes the supply of running water to all of the homes in this area.

Jamil Sanduka, chairman of the Ras Hamis Neighborhood Committee, said residents are forced to buy bottled water at exorbitant prices, although about 80 percent of them live under the poverty line.

“There are elderly, babies and people with disabilities, and the situation has become unbearable,” Sanduka said. “Anywhere else, if thousands of people were without running water, this problem would have been solved quickly. In our case, the problem is first and foremost that all the responsible parties simply do not care.”

As part of a 2005 cabinet decision on the route of the security barrier, officials committed to addressing the lack of proper infrastructure in neighborhoods east of the barrier, ACRI said. Yet after nine years, little progress has been made, the organization stressed.

In response to the filing of the High Court petition, the National Infrastructure, Energy and Water Ministry said that “if and when the petition reaches us, it will be examined and our response will be submitted to the court.”

The Jerusalem Municipality, meanwhile, said that the responsibility for this issue falls with Hagihon.

Addressing the situation, a spokesman for Hagihon referred to a meeting a few days ago of the Knesset Public Petitions Committee, in which MK Adi Kol (Yesh Atid) demanded that the Water Authority regulate the shortage in the northeastern Jerusalem neighborhoods located beyond the security barrier.

At the committee meeting, it was revealed that about NIS 100 million of infrastructure improvements are required in these neighborhoods, Hagihon said. Meanwhile, the company provides residents there with about 1.5 million cubic meters of water annually at a cost of NIS 10m. for free, according to Hagihon general manager Zohar Yinon.

Following the Knesset committee meeting, Yinon sent on Monday a letter to Jerusalem Police commander Asst.-Ch. Yossi Pariente requesting security escorts for Hagihon workers to be able to conduct professional tours and evaluations in the neighborhoods. Infrastructure planning will require mapping and examinations of the pirated connections in the area as well as of the existing infrastructure, Yinon wrote.

Asking the police to give priority to the issue, Yinon said it is necessary to find water and sewage solutions for the population as soon as possible.

“The truth is that time and time again we approached the Water Authority in the last couple of years and we have had endless sessions with them about how to approach this matter of unauthorized building in those few neighborhoods beyond the security wall,” Yinon told The Jerusalem Post on Tuesday night.“The situation has not enabled us to work there on a normal basis as we do in every part of Jerusalem – the south, east or west of Jerusalem.”

Because Israeli zoning and planning rules are not implemented east of the barrier, residents are building homes on top of the water networks, installing pirate connections and engaging in vandalism, Yinon said.

“We are not allowed to work there without special permission from the police, which is given at a very specific basis,” he said. “When you have to operate water and sewage networks, you have to work on a regular basis.”

Meanwhile, he explained, about 97 percent of the people living in these neighborhoods do not pay for their water and sewage services, Yinon said.

“It’s like Hagihon is supplying a medium- sized city water for free,” he said.

Emphasizing that Hagihon is doing everything possible to fix the situation, Yinon said that the Water Authority is ultimately responsible for water and sewage. As the authorized state agency, the Water Authority should be holding necessary meetings on the subject with relevant bodies, such as the IDF, the police, and the Interior, Finance and Justice ministries, he said.

“We have approached the Water Authority time and time again and they are not doing their job,” he said.

“Our frustration is that we saw the problem coming,” Yinon added. “We saw the disaster coming.”

In response, Water Authority spokesman Uri Schor said that ultimately, Hagihon is the supplier of water to Jerusalem and responsible not only for supplying the water to residents, but also for collecting the money owed for this service.

“The Water Authority is aware of the problem and has instructed Hagihon to inspect the area after they receive the police escort, and what they need to do is try to understand what are the problems and to overcome them,” Schor told the Post. “Hagihon is the supplier of water in Jerusalem.”