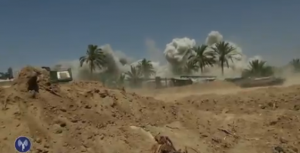 Egypt has in the past flooded Hamas tunnels along the Gaza Strip with sea-water or sewage, and has destroyed hundreds of homes on the Egyptian side of Rafah to remove the tunnels.

The Egyptian military began cracking down on tunnels stretching from the Hamas-run coastal enclave into the restive peninsula following the country’s September 2013 coup, which saw Muslim Brotherhood’s Mohammed Morsi ousted and imprisoned.

In February 2016, Yuval Steinitz, Israel’s minister of National Infrastructures and Energy, claimed that Cairo did so at Jerusalem’s request.

The Muslim Brotherhood was designated as a terrorist organization by Cairo following Morsi’s ouster.

Last year, former Egyptian President Hosni Mubarak testified against Morsi and claimed that Cairo did not know that some 800 armed individuals had crossed into northern Sinai via Gaza tunnels.

“General Omar Suleiman informed me on January 29 (2011) that they entered Egypt through Gaza and had weapons… They headed toward the prisons to release prisoners belonging to Hezbollah, Hamas and the Muslim Brotherhood,” Mubarak was quoted by Reuters as saying.

The IDF has also invested extensively in locating Gaza cross-border terrorist tunnels and has destroyed 15 of them this past year, including one tunnel which stretched into both Israel and Egypt’s Sinai Peninsula near the Kerem Shalom crossing.

Israel denied claims the tunnel was used for smuggling, asserting Hamas intended to use it to bring terrorists and weapons from Egypt into the Gaza Strip for a possible future combined attack on the Kerem Shalom crossing from the Egyptian side.

It was completely destroyed by an IAF airstrike last January in the southern part of Rafiah in the Hamas-run Gaza Strip. The tunnel struck by the air force stretched almost one km passing below the Kerem Shalom crossing and several strategic targets including a gas pipeline, before continuing into Egyptian territory.

The IDF also destroyed a tunnel extending into the Mediterranean which would have enabled terrorists who entering a Hamas military post in the northern Gaza Strip to exit into the sea unnoticed.

Israel has completed 27 km. of its underground barrier designed to prevent tunnels from crossing into Israeli territory from Gaza. The barrier will also stretch into the Mediterranean to stave off Hamas infiltration by sea.