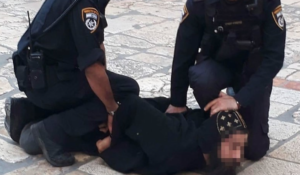 The Copts were protesting the start of restoration work by the Israel Antiquities Authority at the St. Michael the Archangel Chapel, which both the Ethiopian and Egyptian Orthodox churches claim.

The Church of the Holy Sepulcher, located in Jerusalem’s Old City, is shared by several Christian denominations. A long-standing status quo governs the sects’ ownership and management of the holy site. Each group is fiercely protective of its territory, and even perceived alterations to the status quo have resulted in arguments or violence.

The antiquities authority was to perform repairs after a stone fell out of place in the chapel in September 2017.

The police said that after priests blocked the entrance and barred the workers’ entry, officers forcibly removed the priests and arrested one man.

The Church of the Holy Sepulchre in Jerusalem’s Old City. – Photo: Wikimedia

Mazen Qupty, a lawyer for the Coptic church, said one priest was briefly detained and several suffered minor injuries.

An umbrella group of churches in the Holy Land issued a statement denouncing the use of force by police against the priests. It said the Orthodox Coptic Patriarchate filed a complaint with the Israeli Justice Ministry, and that the Copts plan to hold a protest against the police action in the coming days.

“While we condemn the actions of the police officers toward Coptic monks, we demand that Israeli authorities … hold accountable the mentioned police officers, and respect the basic rights of the people for freedom of expression and demonstration,” Wadie Abunassar, adviser to church leaders in the Holy Land, said in a statement.