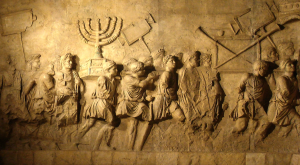 Abruptly interrupting Dr. Gabriel Barkay as he lectured US college students, a Palestinian guard warned him to stop referring to the holy site as “Temple Mount”.

One of the nation’s most vaunted archeologists said he was rebuked by a Wakf Muslim religious trust guard and police officer over the weekend for referring to Judaism’s holiest site as the “Temple Mount” during a tour on the compound with US college students.

Jerusalem Prize winner and Temple Mount Sifting Project co-founder, Dr. Gabriel Barkay, on Tuesday said he was guiding an interfaith group of 22 undergraduates from UCLA Sunday morning when he was interrupted by an Arab guard for making the seemingly innocuous reference.

Dr. Gabriel Barkay at Ketef Hinnom, sitting on top of the cave where he discovered the Silver Scrolls, two silver amulets that contain the Priestly Benediction, (from the Book of Numbers) the oldest Biblical inscriptions ever found, predating the Dead Sea Scrolls by at least 400 years. – Photo: Wikimedia Commons

“I was lecturing about the history of the Temple Mount with the students, some of whom were Muslim and Christian, and one of the Wakf guards tried to listen to my explanations, and when he heard the words ‘Temple Mount’ he got upset,” said Barkay.

The guard then consulted with nearby police officers stationed on the compound, who told Barkay to cease using the term for the duration of the visit.

“The policeman told me he had to accept the complaint, so I used the letters ‘TM’ going forward to describe the site,” he said. “We stayed up there from 8 until 10:30 a.m. and didn’t have any other problems. The whole thing is ridiculous.”

“Temple denial has become so ridiculous that it actually helps the Israeli cause,” he opined.

The incident comes after UNESCO ruled in October that the Temple Mount has no connection to Jewish history.

Asked how the students responded to the mandate, Barkay replied: “They began to understand the delicacy of one of the most contested places on earth.” He added that the Muslim students, including one woman who wore a hijab, did not object to his historically-correct terminology.

Sunday’s incident was not the first time Barkay, who visits the site roughly every six weeks, has found trouble on the compound.

“I’ve had all kinds of issues before, including violence,” he said, noting that he was physically and verbally attacked by Arabs there several months ago, and routinely faced harassment before the government banned the northern branch of the Islamic Movement from the site in 2015.

Nonetheless, Barkay said he will continue to visit holy site.

“I am not deterred by this at all,” he said.