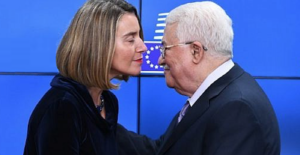 EU has promised to cover PA’s April salaries/pensions since they were cut by 50% to maintain its ‘Pay for Slay’ monthly stipends to assassins and their families, after Israel began deducting tax revenues earlier this year.

The European Union has pledged to give the Palestinian Authority €15 million ($17 million) to cover the salaries of public employees – salaries that PA President Mahmoud Abbas cut to keep up payments to imprisoned and released terrorists, wounded terrorists and the families of dead terrorists.

Abbas has declared that the PA is “obligated” to continue rewarding the terrorist prisoners and families of so-called “martyrs.”

Earlier this year, Israel decided to withhold from the tax money it collects on behalf of the PA an amount equalling the sum the PA pays to terrorist prisoners. These prisoners include mass murderers and heads of terror organizations. In response, the PA has refused to accept all the tax money, amounting to over 50% of its budget, thereby inflicting a serious financial crisis on itself.

To overcome this crisis – and in order to have money available to continue to pay the terrorists in full – the PA cut the salaries of its public employees by 50 percent.

According to the nongovernmental organization Palestinian Media Watch, Abbas then turned to Europe for money, claiming Israel was responsible for the PA’s self-inflicted crisis.

The European Union has now answered his appeal.

EU Commissioner for European Neighborhood Policy & Enlargement Negotiations Johannes Hahn told the Ad Hoc Liaison Committee of PA donor countries in April: “We are all aware of the fiscal crisis the PA is facing and of the potential human, social and security consequences. Both sides need to move towards a solution. Israel’s decision to withhold clearance revenues violates current arrangements. At the same time, we do not support the system of Palestinian payments to ‘prisoners and martyrs.’”

Example of Pay to Slay Jews program: The Fogel family were stabbed to death (and infant decapitated) in their home by Palestinian terrorists. – Screenshot/ YouTube