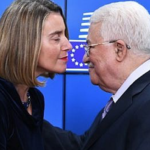 EU has promised to cover PA’s April salaries/pensions since they were cut by 50% to maintain its ‘Pay for Slay’ monthly stipends to assassins and their families, after Israel began deducting tax revenues earlier this year.

The European Union has pledged to give the Palestinian Authority €15 million ($17 million) to cover the salaries of public employees – salaries that PA President Mahmoud Abbas cut to keep up payments to imprisoned and released terrorists, wounded terrorists and the families of dead terrorists.

Abbas has declared that the PA is “obligated” to continue rewarding the terrorist prisoners and families of so-called “martyrs.” Continue Reading »

While Palestinian Authority (PA) TV has often been caught inciting violence and hatred of Jews, a recent broadcast by a European Union (EU) funded NGO has brought the defamation of Jews to new lows.

In an episode of the program Sights of Jerusalem broadcast October 18 on official PA TV, Jews are dehumanized as “crows” and “rats,” and further called “foreigners” in Jerusalem, the 3,000 year old Jewish capital.

Selections from the program subtitled into English by Palestinian Media Watch (PMW) can be seen here:

In the video, the narrator calls the Israeli flag a “rag dipped in our blood,” claiming that Arabs cannot raise their heads in Jerusalem. Continue Reading »

And the EU continues transferring money to Abbas’ Palestinian Authority

PA Minister mocks EU for criticizing PA use of funding for terrorists’ salaries:
“The Europeans want their money that comes to us to remain ‘clean’ – not to go to families of those they claim to be terrorists… [but] These [prisoners] are heroes”

EU ignores its own principles, continues transferring funds to the PA and facilitating salaries to terrorists
“The EU donated approximately 11 million euros to pay the November salaries… [of PA] government employees”