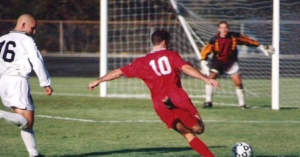 Although the FIFA Ethics Code prohibits host countries from discriminating against fans based on their nationality, the advocacy group StandWithUs petitioned the Int’l Football Association as to why Israel was not on the list of countries that require a visa to attend the 2022 World Cup.

The Israel advocacy group StandWithUs called on the international soccer governing FIFA to ensure Israelis would be allowed to visit Qatar during the World Cup tournament in 2022.

The organization made the plea after it was revealed that Israel was not included in the online list of countries from which foreigners can obtain an entry visa to the Arab state for the purpose of attending the soccer competition.

Qatar has no official relations with Israel and Israelis are generally not allowed to enter its territory. But the FIFA Ethics Code prohibits host countries from discriminating fans based on their nationality during official sporting events.

“We call upon FIFA not to score an own goal and to uphold their code of ethics, which is premised on protecting international football from ‘illegal, immoral or unethical’ practices. If Qatar is allowed to ban fans on the basis of national origin, this would be a clear violation of FIFA’s guidelines,” CEO and Co-Founder of StandWithUs Roz Rothstein said.