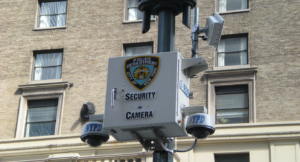 “An attack on the Jewish community is an attack on all New Yorkers,” de Blasio said. “These new security cameras will increase the NYPD’s visibility into these neighborhoods, and help our officers on the ground keep New Yorkers safe.”

The camera program comes at a time when the city has seen close to a dozen anti-Semitic incidents in recent weeks. In a news briefing earlier this week, NYPD chief Michael LiPetri, head of the office of crime strategies, said that in 2019 there were 234 anti-Semitic crimes, with a large component involving the scrawling of swastikas. A small number of the 2019 incidents, about 15, involved assaults, noted LiPetri.

The camera placement is one of a number of initiatives being undertaken by the city to combat anti-Semitism. Other programs include the deployment of more than 150 additional officers for patrol, the installation of more the 20 light towers in predominantly Jewish neighborhoods and the creation of a new NYPD unit to monitor domestic terrorism and organized hate groups.

Beyond New York City, the metropolitan area has seen a series of recent attacks ascribed to anti-Semitism. Five people were injured when a man said to have mental health issues allegedly slashed revelers at the house of a rabbi in upstate Monsey during a Hanukkah celebration late last month.

Also last month, in Jersey City, two armed attackers shot and killed four people, including three in a kosher market and a police officer. The attackers were shot dead in a gun battle with police.