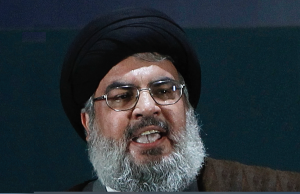 “After liberating the Lebanese occupied territories from the Zionist enemy in 2000, the UN demarcation of the national border with the Palestinian territories left 13 controversial positions, and the Lebanese government informed the UNIFIL about its rejection for any Israeli measure in this concern,” Nasrallah was quoted by Hezbollah website al-Manar as saying.

“The Islamic Resistance backs the Lebanese government and army, and the Zionists must take Lebanon’s warning seriously,” he continued.

On Friday, Lebanese President Michel Aoun met in Beirut with UNIFIL Head of Mission and Force Commander Maj.-Gen. Michael Beary and stressed that a border fence within the demarcated Blue Line “isn’t compatible with the efforts that [UNIFIL] is exerting in cooperation with the Lebanese Army to preserve security and stability along the southern border.”

Israel and Hezbollah fought a deadly 33-day war in 2006 that ended under UN Security Council Resolution 1701, which called for the disarmament of Hezbollah, withdrawal of the Israeli Army from Lebanon, deployment of the Lebanese Army and an enlarged UN force in the south.

According to Aoun, “Lebanon doesn’t consider the Blue Line to be the final border. It is a temporary measure that was used following [Lebanon’s] liberation in 2000 and Israel’s withdrawal.”

Map is made by Thomas Blomberg using the UNIFIL map, deployment as of July 2006 as source. – Wikimwdia/99of9/IsraelandStuff

“The army has deployed an additional troop to maintain stability and help implement resolution 1701, at the time that Israel persists its incessant violations against the country’s sovereignty,” he added.

Tripartite meetings have been held regularly under the auspices of UNIFIL since the end of the 2006 war as an essential conflict-management mechanism between the two parties.

The IDF on Sunday denied it had stopped construction on the fence, telling The Jerusalem Post that work was continuing as normal.

The border area with Lebanon has seen nine infiltrations since 2009, and has been flagged by the IDF as being vulnerable to enemy infiltrations. It is feared that during the next war with Hezbollah, the terrorist group could try to infiltrate Israeli communities in the area in order to inflict significant civilian and military casualties.

Significant efforts over the past several years have gone into creating obstacles, such as artificial cliffs and high concrete barriers, to help prevent any such ground attacks by Hezbollah.

The border fence with Lebanon was originally built in the 1980s and has been upgraded several times. Last year, a 29-km. stretch was upgraded with reinforced concrete panels, concrete blocks and fortified watchtowers. Despite those improvements, the barrier is said to be in poor condition.

In May, Israel began upgrading two sections of the fence: between Rosh Hanikra on the northern Mediterranean coast and the kibbutz of Misgav Am near Kiryat Shmona, and from Rosh Hanikra to Hanita, northeast of Nahariya.

The steel and barbed wire fence will be similar to the “smart fence” along Israel’s border with Egypt and along some 30 km. of its border with Jordan. The barrier will be six meters tall, several kilometers in length and have information collection centers and warning systems at an estimated cost of NIS 120 million.