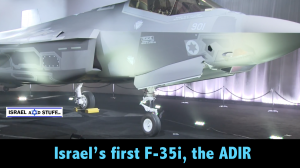 IDF will not only take possession of the first F-35 exported from the US, but all classified communications systems used in the jets will be produced in Israel, and the IAF will use its own electronic warfare systems, making the fighter-jet uniquely ‘Jewish’.

The IDF will become the first country outside of the United States to possess the groundbreaking F-35 Lightning II fighter jet, which it will call the Adir. The first two planes will reach Israel in about six months, with another 17 arriving by the end of 2017. At that point, the IDF’s F-35 squadron will begin operations.

The jet is so innovative that a senior Air Force officer was quoted as saying that it could even serve as a first-rate intelligence plane due to its information processing systems and sensors. It can decrypt any enemy radar signal long before it is recognized, allowing it to operate far from Israeli territory without fear of discovery.

A senior official in the Air Force noted that all classified communications systems used in the jets will be produced in Israel. The United States has even given a special exception allowing the IDF to use its own electronic warfare systems.

Israel will take possession of the first jet at 6:00 p.m. (Israel time) today. Arutz Sheva will provide live coverage of the event.