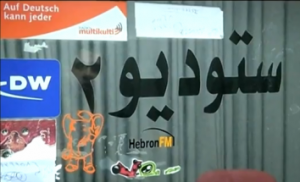 The Israel Defense Forces, Shin Bet security agency and the Coordinator of Government Activities in the Territories (COGAT) shut down on Saturday night a radio station in Hebron which the IDF said was broadcasting content that incited Palestinian listeners to attack Israelis.

An employee of the El-Halil radio station after it was shut down Saturday night – Photo: AFP

Employees at El-Halil radio station said IDF soldiers confiscated their equipment, including computers and transmitters, forcing the radio station off the air.

According to COGAT, the station broadcasts lies about Palestinians being executed and abducted by Israeli security forces. The station also congratulates families of “shahids” (martyrs), glorifies terrorists who have carried out stabbings and car ramming attacks and continually calls on Palestinians to carry out revenge attacks against Israelis.

Many of the terrorists who have perpetrated attacks since the beginning of October have hailed from Hebron and its environs. Hebron terrorists have carried out attacks in Jerusalem, Tel Aviv, Kiryat Gat, Beit Shemesh and other places. Following Thursday’s terrible attack that left three Israeli civilians dead near Alon Shvut in Judea, the IDF reinforced its units over the weekend in the Hebron sector.