The NGO B’Tselem charged that the temporary structures in the herding communities housed 14 families who are now homeless and have no shelter from the harsh sun.

But the NGO Regavim which monitors illegal Palestinian construction, said that none of the structures which were razed had housed families.

The demolitions occurred less than a week after a Knesset Foreign Affairs and Defense Committee sub-committee on Judea and Samaria had urged the Civil Administration to do more to combat illegal Palestinian construction, particularly in the area just outside of Jerusalem, where the Ma’aleh Adumim settlement is located.

The office of the Coordinator of Government Activities in the Territories, is working on a plan to relocate the Palestinian Beduin in that area, to a newly created community just outside the Palestinian city of Jericho.

At the meeting, the chairman of the FADC sub group on Judea and Samaria MK Motti Yogev (Bayit Yehudi) warned that Palestinians were deliberately putting up illegal structures to prevent the expansion of Ma’aleh Adumim in the direction of Jerusalem.

The Coordinator of Government Activities in the Territories Maj.-Gen. Yoav Mordechai said that just the opposite was true. The Civil Administration, he said, takes down more illegal Palestinian structures than Jewish ones.

Ma’aleh Adumim Mayor Benny Kashriel said he saw Monday’s demolitions as a sign that the IDF and the government was taking the issue more seriously than it has in the past. 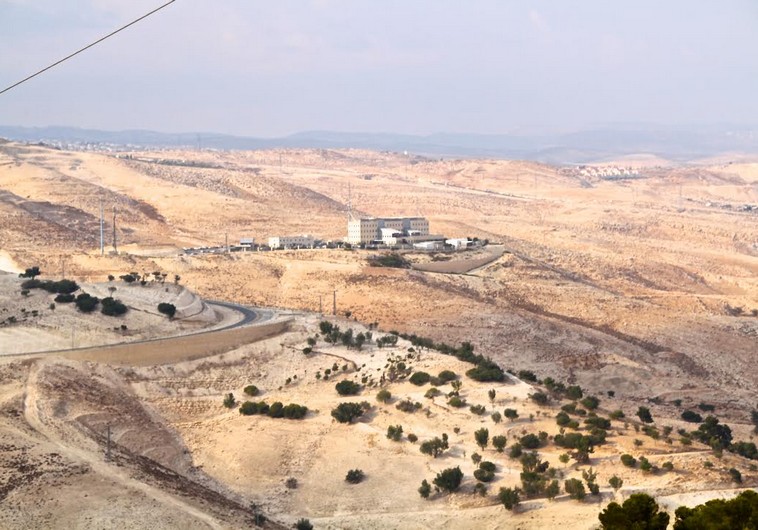 The E1 territory, located outside of Jerusalem and within the jurisdiction of the Ma’aleh Adumim municipality. – Photo: TOVAH LAZAROFF

“We have been freezing [settler] construction while allowing the Palestinians to build.”

Kashriel added, “the Palestinians are trespassing and slowly taking control of our territory.”

But Regavim’s director of international relations Ari Briggs said the IDF was playing a numbers game, by comparing its demolition of temporary Palestinian structures that would be replaced the next day, with the razing of permanent settler homes.

He charged that the IDF had deliberately held off from taking down EU funded modular structures in those communities.

The blue EU logo seen on new modular structures in an illegal Beduin encampment in the Judean hills outside the Ma’alen Adumim settlement, only exasperates the illegality of squatting on state land, with the EU’s illegal involvement. – Photo By: TOVAH LAZAROFF

According to B’Tselem, the Civil Administration took down four temporary structures in the a-Sa’idi community near a-Za’ayem, which made up more that half of that community of six families. The four structures that were demolished housed four families, B’Tselem said. Total, it said, 32 people, of which 11 were adults and 21 were minors lived in those communities.

The Civil Administration then entered the abu-Falah community, in the Khan al-Ahmar area, B’Tselem said. It razed a residential shack of timber and plastic sheeting that a family had built for its two older children, B’Tselem said. A demolition order against the shack had initially been issued in October 2014, it added.

According to B’Tselem the Civil Administration on Monday also took down 12 structures in the adjacent Bir-al-Maksub and Wadi Shneisel Palestinian Beduin communities. Nine of the structures housed 60 people, of which 39 are minors. It added that three of the structures that were taken down were used to house the communities’ herds.