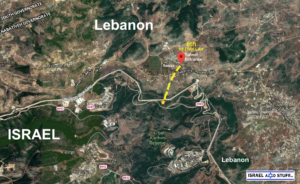 According to the military, the tunnel was the largest tunnel discovered so far, stretching hundreds of meters from the southern Lebanese village of Ramiya and infiltrated several dozen meters into northern Israel.
The tunnel, which had been dug at a depth of 55 meters (180 feet), was the most important one detected since the operation began in December, IDF spokesman Brig.-Gen. Ronen Manelis said.

180ft deep underground
2,624ft dug under #Lebanon
Dozens of yards dug into Israel
This #Hezbollah attack tunnel was dug from the Lebanese village of Ramyeh into Israel & will be neutralized soon.

We have now exposed all attack tunnels dug by Hezbollah from Lebanon into Israel. pic.twitter.com/AU0zNbmCCM

According to him, the stairs were built in the tunnel which contained “railroads to transport equipment, garbage, lighting equipment and ladders to enter Israeli territory. A lot of resources were invested in this tunnel.”

With the discovery of this latest tunnel and its destruction set for the coming days, he added, “the threat posed by the tunnels has been eliminated.”

Israel launched Operation Northern Shield in early December to discover and destroy tunnels dug by the Lebanese Shi’ite terror group into northern Israel. The IDF has so far destroyed at least four cross-border tunnels, two by explosives and another two by flooding with liquid concrete.

Lebanon’s Naharnet news site said that Israel poured liquid concrete into a tunnel on Friday near the village of Adaisseh, across from the Israeli town of Misgav Am.

“Operation Northern Shield deprived Hezbollah of the unique offensive abilities it had built for years as part of its planned attack on Israeli territory,” the army said in a statement, adding that “the operation reflected advanced operational and intelligence technological capabilities and multi-stage detection of underground areas that have developed even more over the past few weeks.”

While the military announced the end of the operation, it noted that it “is simultaneously monitoring several locations where Hezbollah is digging underground structures which have yet to cross into Israel.”

It will also continue a “broad defense effort” along the Lebanese border to ensure that Hezbollah does not try to dig future tunnels into Israel by integrating various means such as the ongoing construction of the border wall with Lebanon.

“In addition, troops and the tunnel-finding laboratory will continue serving permanently along the Lebanese border,” the army said, adding that “The IDF is determined to protect the citizens of Israel and will continue to operate in the area and to monitor possible underground activity.”

THE LEBANON state-run National News Agency quoted Foreign Minister Gebran Bassil as saying on Friday said the ministry would file a complaint to the UN Security Council against Israel’s construction of the wall, saying that it violates Resolution 1701 which ended the Second Lebanon War in 2006.

On Saturday, UNIFIL spokesman Andrea Tenenti said that efforts are being made to avoid any “misunderstanding and find a mutual solutions for the issue,” and that “our soldiers are on the ground to monitor the situation and maintain calm along the Blue Line,” he said.

The military said on Sunday that it notified the UN peacekeeping force of the tunnel discovered over the weekend, as well as the heads of local governments in the area. UNIFIL has confirmed the existence of four tunnels, two of which crossed the Blue Line in violation of resolution 1701.

Last week, UNIFIL Commander Maj.-Gen. Stefano Del Col chaired the first tripartite meeting of the year with representatives from the IDF and Lebanese Armed Forces to discuss the cross border tunnels as well as other violations.

“I again call on the parties to make full use of UNIFIL’s liaison and coordination arrangements,” said Del Col. “Any activity close to the Blue Line should be predictable, with sufficient prior notification to allow UNIFIL to duly inform the other party and so that coordinated security arrangements could be put in place to prevent incidents or violations.”

The Israeli military has repeatedly warned that the Lebanese government is responsible for the digging of the tunnels which they say were part of a Hezbollah plan to attack communities in northern Israel.

The military believes that the attack tunnels were built as a classified component of Hezbollah’s “Conquer the Galilee” plan, which would have allowed the group’s elite Radwan fighters to infiltrate into Israel on land and fire short-range rocket and mortars, as well as allowing other Radwan fighters to infiltrate into communities, cut them off from Route 90 and kill as many civilians and troops as possible.

Thousands of rockets were expected to be launched toward the Jewish state by the Iranian-backed Shi’ite army within the first couple of hours of such a conflict.