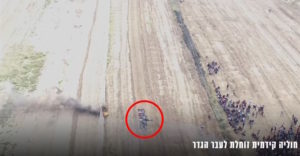 A few hours ago, a Hamas terrorist tried to sabotage the fence and other security equipment at the Karni Crossing, near where the Hamas-led assault on the fence was stopped only two days ago. He was apprehended. Another attempt by Hamas to attack Israel. More details to follow. pic.twitter.com/a0vxolDKO5

Over the last five weeks, about 40 people have been killed in riots along the Gaza border. Approximately 80% of the fatalities have been identified as terrorists and members of Hamas and other terrorist organizations in the Gaza Strip.

During the latest riots on Friday, Gazans burned tires, attempted to burn and breach the border fence, threw rocks at IDF soldiers, and threw firebombs attached to kites into Israeli territories.

One of these kites set a wheat field on fire, causing tremendous damage.

On Saturday, Hamas leader Ismail Haniyeh urged the rioters to intensify their confrontations with the IDF.