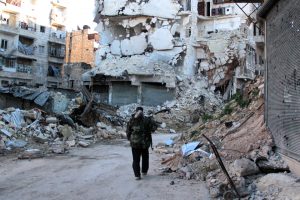 Jewish Agency spokesperson: “We are looking into the matter in order to determine whether the information can be verified and will act accordingly.”

A family from Syria’s war-torn Aleppo is appealing to the state of Israel for refuge, citing their Jewish heritage, Amy Radio reported Sunday.

“There is nobody who can help us to get out of this place,” said 30-year-old Aleppo resident Razan (real name withheld) in an audio recording aired on the radio station. “We are asking that the Israeli government does not abandon us, but helps us get out of here to another country. I ask that the government demands from the entire world to do this. All my love and loyalty is to this religion [Judaism].”

Razan’s younger brother, Salah, contacted Army Radio with the family’s story, after having himself escaped to London via Turkey a year-and-a-half ago. He says his mother is Jewish and his father Muslim, and that he had always considered himself a Jew.

“The government is a great government, and I don’t believe it will abandon a single Jew in the world,” Razan said. “Every Jew knows that it won’t neglect them – because it’s the best country in the world.” Salah also said that he wishes to move to Israel.

Elizabeth Tzurkov, a Syrian researcher at the Forum for Regional Thinking told Army Radio: “…a number of Syrians have approached me who are descendants of Jewish women, who converted to Islam or who did not convert, and inquired how they can move to Israel.”

Jewish Agency spokesperson Avi Mayer told The Jerusalem Post: “We are looking into the matter in order to determine whether the information can be verified and will act accordingly.”

Meanwhile, the Population Immigration Authority told the Post that it was not aware of this case and would require further details.

The Jerusalem Post could not confirm the veracity of this report.