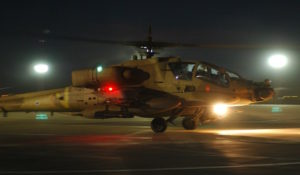 This is the first rocket to be launched from the Gaza Strip since the November fighting round, in which hundreds of rockets were launched at Israel from the strip, causing damages to property and killing one.

These attacks follow the latest weekly riots along the Gaza border Friday, in which one Palestinian man was shot dead.

Karam Fayyad, 26, sucummbed to his wounds at a hospital in the enclave after being wounded by IDF fire, and  six other people were wounded during the protests that went ahead despite stormy weather.

“Troops resorted to live fire after confronting 5,000 rioters, some of who threw rocks and grenades,” said an IDF spokeswoman.

She added that two Palestinians briefly breached the border fence before returning into Gaza.

As the protests ended, Hamas issued a statement: “The Palestinian nation is determined to continue our struggle against the enemy, no matter the death toll.”

Cluster of balloons attached to an incendiary device, launched from Gaza, landed in the southern Israel. – Photo: Ynet [unattributed]

On Friday morning, a cluster of 10 balloons attached to an explosive device landed near a kindergarten yard in moshav Kfar Maimon, in the Sdot Negev Regional Council, close to the Israeli border with Gaza.

Later, another balloon tied to an explosive device was located in moshav Zru’a, also in the Sdot Negev Regional Council.

In both incidents, a police sapper neutralized the devices.

Coordinator of Government Activities in the Territories for the Gaza Strip Col. Iyad Sarhan issued a social media appeal to residents of the Gaza Strip on Thursday, and warned them not to take part in terrorist attacks on the border fence with Israel.

“Residents of Gaza, what do you want from your upcoming Friday?” said Sarhan in a video message in Arabic that was posted on Facebook. “Do you want to spend it in the bosom of your family or in unpleasant incidents on the security fence? The IDF will not tolerate any attacks on the security fence. We also want a Friday without any casualties on your side, but that depends solely on you.”

He added: “The IDF will not allow rioters to approach or damage the security fence, and any attempt to harm IDF soldiers or violate Israeli sovereignty will be met with a strong IDF response. Keep your distance from the area of the fence, and you will be quite safe. ”

Such IDF announcements are relatively rare, and this was the first of of its kind in weeks. It is apparently a direct result of the deaths of the four Palestinians in last Friday’s clashes as well as the joint announcement by Hamas-led armed groups in Gaza.Last Friday, four protesters were killed on the border during skirmishes with the army, prompting an announcement by the terrorist organizations in the Gaza Strip that this Friday would be a “test day.”

The announcement added that “The crimes against the Palestinian people have crossed all red lines,which the resistance will not accept.”

“Neither the (lack) of money, electricity and water, nor even air will stop us from fulfilling our duty. It appears the enemy misses the rounds of fighting and the harsh retaliation of the resistance. The enemy’s actions will dictate the nature and timing of our response,” the statement added.