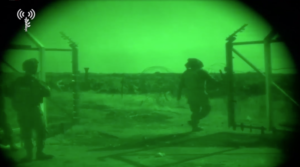 The IDF sent humanitarian aid to the Syrian Golan Heights on Thursday night after some 120,000 fled the southwestern part of the country in the wake of the Syrian army’s onslaught in the area.

During the special overnight operation, some 300 tents, 13 tons of food, 15 tons of baby food, three pallets of medical equipment and medicine and some 30 tons of clothes and shoes were transferred into Syria from four different spots on the border.

The aid was transferred to Syrian refugee camps in the southern and central parts of the Syrian Golan. The camps, located near the border with Israel, house several thousands of Syrians under poor conditions with no access to water, electricity, food or other basic necessities.

While the IDF sent humanitarian aid, it made it clear it will not allow fleeing Syrians to enter Israel. “The IDF will continue maintaining Israel’s security interests,” the army said in a statement.

The IDF Spokesman’s Office also said the army was monitoring the events in southwest Syria and was prepared for a variety of different scenarios, including sending further humanitarian aid.

For several years now, as part of its “Operation Good Neighbor,” the IDF has been providing humanitarian, life-saving aid to Syrian civilians caught in the crossfire of the civil war raging in the country, while at the same time avoiding interfering in the conflict.

“The (Operation Good Neighbor) activity has become all the more important these days in light of the difficult conditions faced by the Syrian Golan residents,” the IDF said.

The Free Syrian Army reached a temporary ceasefire agreement with Russia in southern Syria, which started at midnight and ends at midday Friday.

The Syrian Observatory for Human Rights said more than 120,000 people have been forced to flee the area, with tens of thousands gathering at Syria’s border with Jordan and thousands more fleeing to the frontier with Israel.

Observatory Director Rami Abdulrahman, speaking by phone, said civilians had now mostly left the eastern part of Deraa province, where government forces have been advancing. Some people had also crossed into government-held areas, he said.