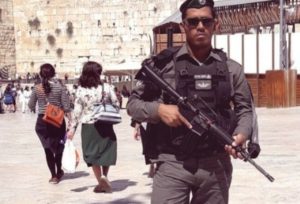 Three years ago, Herrera made aliyah from Honduras and began studying at a haredi yeshiva in Jerusalem. After his course of study, he said he wanted to enlist in the military. But then he encountered pressure from the rabbis at the yeshiva, who tried to talk him out of it.

Jonathan immigrated to Israel with his family where he met Devorah, his wife. Their daughter Avital was born just as Herrera started his combat service with the Border Police. – Photo: Israel Border Police – משמר הגבול

“They tried to convince me not to enlist, but I made aliyah with the goal of fulfilling a dream,” Herrera told Israel Hayom.

After completing basic training, Herrera deliberated about where he wanted to serve. Once he decided on the Border Police, he asked to be assigned to Company C, which patrols one of the most sensitive areas in the country — the Old City of Jerusalem.

“I love the country. Being in the Border Police and serving here in the Old City, for me, is saying ‘thank you’ to the country,” he said.

“I preferred to join the Border Police because that is the force [assigned to] Jerusalem, which I love so much. I dreamed of being here and I’m excited to be fulfilling my dream. It’s true that this is dangerous service, but I feel that I’m doing something important,” he said.

Herrera’s family was already in Israel when he arrived. After making aliyah, he met his wife, Devorah. Their daughter Avital was born just as Herrera started his combat service with the Border Police, at the beginning of 2017. The young family lives in the haredi city of Beitar Illit, in Gush Etzion.

Herrera says that although Devorah didn’t want him to enlist in the military, she is now “happy and proud of me.”