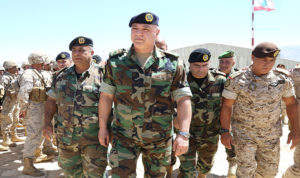 The conference was held at the beginning of the week in Washington, Haaretz reported. Although Aoun did not attend, army heads from other Arab countries like Egypt and Jordan, which have peace treaties with Israel, as well as Saudi Arabia, which doesn’t, did participate in the event, the newspaper noted.

The Chairman of the Joint Chiefs of Staff, Gen. Joseph Dunford, hosts the conference annually. It is attended by dozens of army chiefs from NATO countries, other states that have close security ties with the Americans and countries participating in the international coalition against the Islamic State (ISIS).

According to Haaretz, Aoun had arrived in Washington for the conference and had already met with Dunford, but shortly before the opening session, it emerged that he had decided not to attend the conference at the last moment due to Eizenkot’s presence.

During Eizenkot’s visit in Washington, he is holding working meetings with local security and military officials, as well as a series of meetings with foreign chiefs of staff, with whom he is discussing common challenges, regional and security developments in the Middle East and military cooperation.

Israel and Lebanon, where the Hezbollah terrorist group has a strong political presence, do not have diplomatic relations.

Earlier this year, Lebanese President Michel Aoun twice threatened Israel. In February, he warned that any Israeli attempt to violate Lebanon’s sovereignty would be met with the “appropriate response”.

Several weeks earlier, the Lebanese president called on Arab nations to come together to “protect” the multi-faith character of Jerusalem, accusing Israel of trying to “Judaize Palestine”.