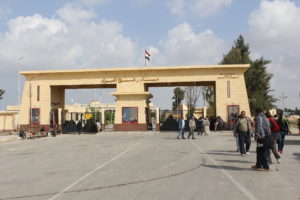 Defense Minister Avigdor Liberman subsequently issued the ban having been informed by IDF Maj-Gen Yoav Mordechai of a set of meetings that occurred between Swiss representatives and the Gaza-based terrorist group leaders, Ismail Haniyeh & Yahya Sinwar.

Swiss officials have been reportedly banned from entering the Gaza Strip by Israel from via territory, following a set of meetings that apparently occurred between representatives from the country and Gaza-based Hamas group leaders, The Times of Israel reported on Wednesday.

The matter was brought to the attention of Defense Minister Avigdor Liberman who subsequently issued the ban having been informed by Israel Defence Forces’ Coordinator of Government Activities in the Territories (COGAT) Yoav Mordechai, reported Hadashot on Tuesday.

Switzerland has in the past come under fire for its pro-Hamas policies. The Jerusalem Post reported in April of this year that the Swiss Foreign Ministry had called for Western dialogue with Hamas for conflict resolution purposes.

Earlier this month, Swiss officials were said to no longer be allowed to visit the Golan Heights after government personnel visited what they referred to as the “occupied territory” to observe drone testing, running contrary to the policies of their foreign office.

Whilst Israel-Swiss relations came under strain in 2014 when Switzerland called a special meeting of parties partaking in the Fourth Geneva Convention that criticized Israel for its actions in the West Bank and Gaza Strip.

Liberman said he would not consider lifting the restrictions on the Swiss officials until the matter of the Hamas meetings was fully investigated following further consultations.