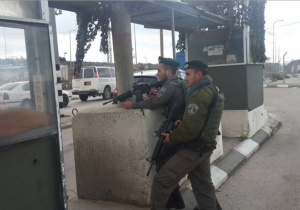 Border police at the junction called on the two men to stop and one officer fired in the air. The two men continued to advance and one of them drew a knife as he moved in their direction.

A border police officer then shot and wounded the two suspects, according to police.

Photos from the scene show one of the men lying on the ground with his hands in the air, a bullet wound in his leg and a knife by his leg.

He called on the government to authorize more building in the area in response.