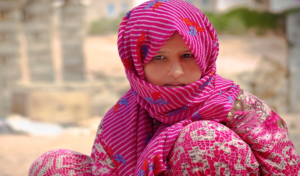 The 14-year-old who comes from the city of Hebron was sold by her abusive father for close to $3000 but, with the help of Israeli border police, escaped and has been taken to a hiding place by Israeli welfare services.

General view of one of the unrecognized Bedouin villages in the Negev Desert of Israel. – Photo: Wikimedia Commons/Neukoln

According to the report, the girl was sold to a man in his thirties in Israel’s southern Negev region, and was repeatedly threatened and beaten. The girl’s case is currently under investigation.

Attorney Nehami Feinblatt, who is representing the family, told Haaretz that the girl’s extended family is grateful for the help provided by Israeli law enforcement and they are trying to find a suitable home for the 14-year-old trafficking victim “so that she can grow up and be rehabilitated in a protected and supportive environment.”

“The family thanks the Israel Defense Forces authorities for distancing her from a dangerous environment and bringing her to Israel,” Feinblatt said.

The girl’s extended family was reportedly appalled by the incident and a letter written by the girl’s lawyers to the Israeli Civil Administration said that when “the family learned about the unfortunate case, the family members decided that they must act in order to see to her welfare and safety and to offer their help in finding a solution for her.”