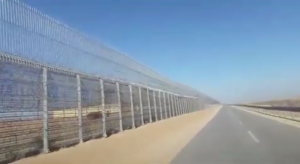 Construction of the original barrier, equipped with information collection centers and warning systems and known as the Hourglass Project, was completed in 2014 at a height of five meters along 242 kilometers, from the Gaza Strip to Eilat on the Red Sea. The government built the fence in the hope that it would stop illegal migration, drug and weapons trafficking and terrorist infiltrations.

According to the Defense Ministry, the fence has already slashed the number of illegal African migrants arriving in Israel, with only 213 breaching the barrier in 2015. But the number of successful infiltrations prompted authorities to raise the height from 5 meters to 8 meters along a 17-kilometer stretch, the ministry said.

The raising of the fence along with additional detection devices “significantly curbed the flow of illegal infiltration into Israel, with only 11 successful attempts to cross the fence throughout 2016,” it said.