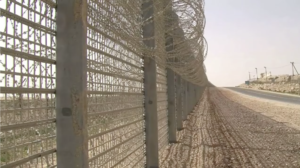 “On Thursday, we began working on the final component of the barrier project along the Gaza border,” said Brig.-Gen. Eran Ophir, head of the army’s fence-building administration. “The barrier is unique and especially suited to threats from the Gaza Strip and will provide a maximum response to prevent entry into Israeli territory.”

The new barrier will be 65 kilometers long, stretching along the route of the border from the new sea barrier near Zikim beach in the north to Kerem Shalom crossing in the south. Made from galvanized steel, it will weigh about 20,000 tons and will reach a height of about six meters.

The project is being carried out by the Defense Ministry’s Engineering and Construction Department and the Border and Sewage Administration.The smart-fence is the above-ground part of Israel’s underground barrier, which has a system of advanced sensor and monitoring devices to detect tunnels. The Defense Ministry stated that the work on the underground barrier “will continue in parallel to the work on the fence.”

At the beginning of the year, Israel announced that the naval barrier meant to stave off Hamas infiltrations from the sea is nearing completion, seven months after work began.

The 200-meter sea barrier is made up of three layers, including one below the sea level, which is lined with seismic detectors and other tools, a layer of armored stone and a third layer in the form of a mound. In addition to the three layers, a six meter (20 foot) smart-fence surrounds the breakwater to provide a final security measure.

“The barrier is similar to the one on the Egyptian border, but it has significant improvements and includes innovative security elements,” the Defense Ministry said in a statement, adding that the smart-fence has been specially adapted to security threats and will have an additional component for the defense of communities in the Gaza border vicinity.

“At the end of last week, we began the construction of the barrier on the Gaza border,” said Prime Minister and Defense Minister Benjamin Netanyahu. “The barrier will prevent the infiltration of terrorists from Gaza into our territory. Those in Gaza have to understand that if they do not keep quiet, we will not hesitate to act.”

The border with Gaza is Israel’s most explosive, with 1,000 rockets fired toward southern Israel in 2018 and more than 10 months of violent protests along fence, with Palestinians launching incendiary aerial devices and throwing explosive devices toward troops. Gazans have also been cutting through the fence, infiltrating from the Hamas-run enclave into southern Israel.

Early on Sunday morning, the IDF arrested five Palestinians who infiltrated into Israel from the southern Gaza Strip. Armed with knives, the men were arrested and transferred to Shin Bet security service for questioning.