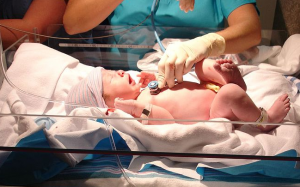 With Mexico placing a distant 2nd with an average fertility rate of 2.2 children per woman and France, the U.S., Britain, the Netherlands, and Spain fairing less than 2 per woman, Israeli women have 3.1 children on average.

Some 186,000 babies were born in Israel over the course of 2016, including 7,676 twins and 261 triplets, data from the country’s maternity wards shows. On average, a baby is born in Israel every three minutes, and a cesarean section is performed every 20 minutes.

The average age at which women in Israel have their first child is rising, and for 2016 stood at 28.3. Births by mothers under the age of 19 are uncommon in Israel, comprising only 0.5% of births, whereas mothers over age 45 accounted for 3.52% of births.

A total of 4.5% of births were multiples (twins and triplets). Among women age 45 and older, most of whom used donor eggs to become pregnant, the rate of twins is four times higher, accounting for 17.8% of births among women in that age group, which also has a higher than average rate of premature births, before the 33rd week of pregnancy. Nearly 7% of mothers in that age group gave birth prematurely, compared to an average premature birth rate of 1.25%.

Professor Ariel Many, chairman of the Israeli Society for Maternal and Fetal Medicine and head of the labor and delivery rooms at Sourasky Medical Center in Tel Aviv, said that “there is a dramatic increase in the number of multiple embryo pregnancies among women age 45 and older, and this plays a significant role in terms of health problems for the mothers, like the risk of high blood pressure, gestational diabetes, even emergency hospitalizations.

“We have a lot of work to do in the field, and the current protocol is to implant only one embryo for women up to the age of 30 who are undergoing fertility treatments or using egg donors when the donor is under 30. This can reduce the chances of these complications. I hope that next year’s data will show a drop [in complications],” Many said.

Mani also noted that fewer mothers were receiving epidurals during birth, with 46% of mothers who gave birth in 2016 using this pain control method, a drop of 5% in the space of a decade, although the rates of epidural use vary from hospital to hospital.

“It’s possible that this has to do with the shortage of anesthesiologists who give epidurals. In some delivery rooms, it’s becoming more common for women to want a more natural birth with less intervention, and say ahead of time that they aren’t interested in an epidural,”Mani explains.