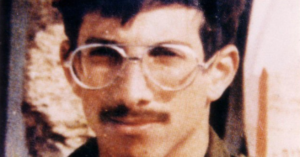 The Israeli Defense Forces said Sunday that the two prisoners were transferred from Israel to the Red Cross in Syria via the Quinetra border crossing in the Golan Heights.

An Israeli official on Saturday morning responded to a reported claim from a Russian presidential official that presented the scenario as an exchange deal, “not a unilateral action,” saying the prisoner release was not part of an arrangement or deal but was decided upon after Baumel’s body was returned.

Israel released Zidane Tawil, who was convicted of drug smuggling and was expected to be released this coming July, according to Israeli media reports.

Hamis Ahmed, a Fatah operative from the Yarmuk refugee camp in Syria will also be released. Ahmed was sentenced to prison until 2023 for attempting to carry out an attack on an Israel Defense Forces base.

A Syrian official later confirmed the report in an interview with Russia’s RT in Arabic, claiming that “at least two” Syrian prisoners would be released in a deal mediated by Moscow.

But Israel swiftly revised the news to explain that the release of the Syrian prisoners was not part of an arrangement for the return of Baumel’s body but rather an after-thought.

“Only after the return of the body of Zacharia Baumel, did Israel decide in recent days to release two prisoners as a goodwill gesture. The issue did not come up in advance,” the unnamed Israeli source said.

“Israel is working tirelessly to restore the POWs and MIAs and will continue to act while safeguarding Israel’s security,” the source added.

Although a decision to release prisoners as a political gesture or in the context of foreign relations requires government approval, the move apparently came as a presidential pardon and approved by Attorney General Avigdor Mandelblit, who decided to eschew such government approval due to special circumstances, according to the left-wing daily Haaretz.

Russian President’s Special Envoy to Syria Alexander Lavrentiev said that the transfer of Baumel’s body “was not a unilateral action,” declaring that Israel would soon release Syrian prisoners.

He explained that the decision was made once the possibility of returning Baumel’s body emerged.

“But this action was not unilateral. Israel made a decision, which it will have to carry out, to release some of the Syrian prisoners who are are in Israeli jails,” Lavrentiev told the government-funded Russia Today (RT) international television network.

“Syria had an interest in performing this action. We will not do anything that is contrary to Syria’s interests, but only things that serve them,” he added.

The Israeli announcement suggested the Syrian prisoners had yet to be released, but was not clear regarding the timing or their identity, though there is speculation that they may of Druze origin, inlcuding Sudki al-Maqat of Majdal Shams, who was sentenced to 14 years in prison two years ago for relaying information about the IDF to Syrian intelligence.

Baumel’s body was returned on April 4th aboard an El Al flight through an anonymous third country intermediary in operation undertaken by Israel’s intelligence agencies.

A funeral was held for him three weeks ago at Jerusalem’s Mount Herzl military cemetery.

The Russian announcement may be considered a sort of appeasement towards Syria, which has dismissed previous claims that Damascus had aided in the recovery of the body by Israel, as the two countries have been in a perpetual state of war since the establishment of the Jewish state.

Putin’s emissary further said that “reports of disagreements between Russia and Iran are completely wrong, and that those who disseminate them are also interested in damaging relations between Iran and Syria.”

Anwar Raja, who commands the Syria-based Popular Front for the Liberation of Palestine previously stipulated that the remains of Baumel were discovered by armed factions in a Palestinian refugee camp near Damascus.

Raja, considered a wanted terrorist by Israel, said that members of the militant groups dug up Baumel’s body from a graveyard near the Yarmouk refugee camp and then transferred to Syria after the bloody 1982 battle in Sultan Yaaqub, which stands just across the border in Lebanon.

During the interview with RT, Lavrentiev also criticized IDF attacks.

“There is a danger in the Israeli Air Force’s attacks on Syria. This leads to an escalation of the situation – not only in Syria, but in the region as a whole. We present our position on the matter to the Israeli side and try to convince it that there are other ways to influence the developments in the situation without causing destruction to the buildings and sites in Syria. We are afraid of an all-out war and we will not agree that Syria will become a battlefield or an arena for closing accounts between the powers.”

Aftermath of alleged Israeli airstrike near Maysaf, Syria on April 13, 2019
Also on Saturday, Russia released a former student convicted for trying to enter Syria in a high profile 2016 case after she was granted parole this month.

Varvara Karaulova was released a year and 10 months early after a military court sentenced her to four and a half years in prison in 2016 for trying to take part in a terrorist organization in Syria, which she claimed came as a result of falling in love with a Russian Islamic State jihadist fighting in the war-torn country.