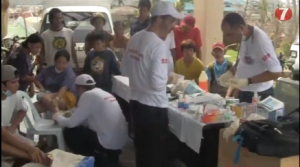 A second aid delegation is expected to depart for Indonesia later this month and will consist primarily of trauma specialists.

The death toll from Friday’s 7.5 magnitude earthquake that resulted in a devastating tsunami has risen to 1,558, with scores more believed buried in deep mud and under debris of collapsed buildings and homes.

Thousands have been injured and more than 70,000 evacuated to shelters and makeshift tents that have sprouted across Palu, the provincial capital of Sulawesi Island – home to most of the victims – and its surrounding areas.

After days of initial chaos and looting by desperate survivors, some stability has returned to Palu, with some shops having opened and electricity restored in some parts of the city.

Officials said more volunteers will fan out across outlying areas cut off by the disaster to distribute aid to survivors.

“The earthquake and tsunami cut off many transport routes in this remote area,” Zubedy Koteng from Save the Children said in a statement. “We sent out three teams, on different routes, with as many supplies as they could carry to ensure we could reach people as fast as we could but the journey has taken days. We are relieved that these much-needed supplies have arrived by plane and are starting to get through.”

Save the Children said it sent more than 1,000 kits to provide shelter, hygiene, child-friendly spaces and temporary educational facilities.

“Children urgently need shelter and essential hygiene items to prevent the spread of diseases and contamination as families are packed into evacuation centers with limited supply of clean water,” Koteng said.

Indonesian Vice President Jusuf Kalla, who arrived early Friday in Palu to assess the situation, said it will take at least two years to redevelop and reconstruct the disaster zone.