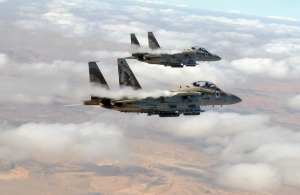 Gaza: Airstrikes in southern area in response… by i24news-en
A 54-year-old Palestinian woman was killed in the strikes and another three people injured. The Islamic Jihad militant group later declared that it would attack Israeli civilians if Palestinian civilians were killed.

The reports came as Israeli Prime Minister Benjamin Netanyahu called for an emergency meeting of the Security Council Friday morning to discuss the escalating violence.

The statement said that “The IDF considers terrorist activities a violation of the State of Israel, and considers Hamas a terrorist organization solely responsible for these terrorist acts.”

“The IDF will continue to act with determination and to the extent required to destroy all under ground tunnels,” it added.

Speaking at a Holocaust Remembrance Day closing ceremony, Defense Minister Moshe Ya’alon said that Israel “will not tolerate a return to a routine of [mortar and rocket] fire and attempts to harm civilians and soldiers” and vowed to act “with great resoluteness and with an iron fist”.

The Israeli army announced the discovery of the tunnel Thursday afternoon, the second such discovery in recent weeks. The Shin Bet security service also announced that Israel has arrested a Hamas operative who belonged to the group’s military wing for a decade, and has provided information about the group’s tunnel digging enterprise

“About four hours ago the IDF exposed a second tunnel in the southern Gaza Strip,” army spokesman Peter Lerner said. 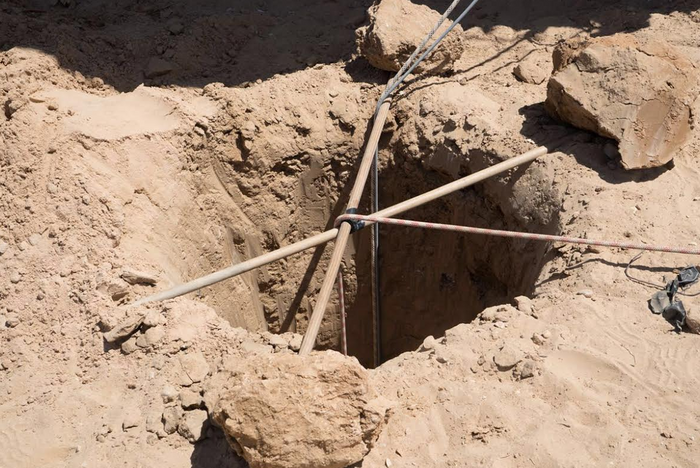 He said the tunnel was around 30 meters (100 feet) underground and stretched from the Palestinian enclave into Israeli territory, though he did not say how far.

The announcement comes as Israeli air strikes hit four Hamas sites in Gaza overnight Wednesday, the military said, following air raids earlier in the day as tensions flared along the border of the Palestinian territory.

“Overnight, in response to the ongoing attacks against Israeli forces, an IAF aircraft targeted four Hamas terrorist infrastructure sites in the northern Gaza Strip,” the military said in a statement.

The Israeli army hit five Hamas operated sites earlier Wednesday in the south of Gaza, in response to mortar shells fired at Israeli troops near the Gaza border.

In the last 48 hours the IDF has reported 11 separate instances of mortar fire towards Israel, including one following the airstrikes.

There were no reported casualties and no claims of responsibility for the mortar fire.

The IDF said it believes that Wednesday’s fire from Gaza was a result of Hamas realizing that the Israeli army was close to detecting the tunnel, and the firing continued Thursday.

Hamas issued a statement blaming Israel for escalating the situation, and the group’s military wing, the Izz ad-Din al-Qassam Brigades, said it saw Israel’s military presence on both sides of the border as a breach of the 2014 ceasefire. The Qassam Brigades called onIsraeli troops to immediately leave Gaza and end the “new offensive”. 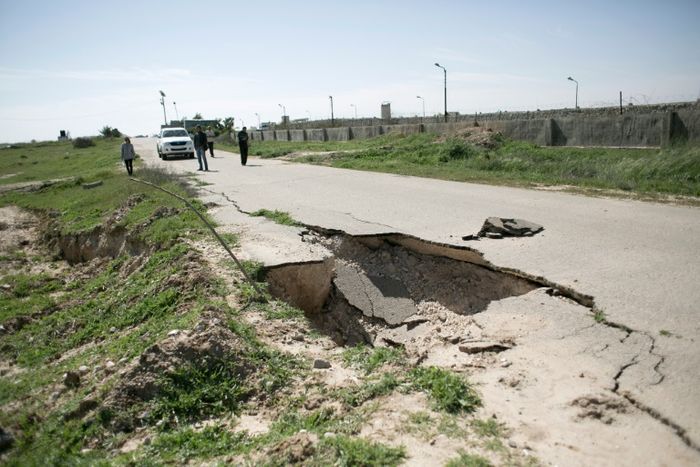 A deep crack in a border road between Egypt and Gaza, in Rafah March 1, 2016 – Photo: SAID KHATIB/AFP

Israeli diplomatic officials sent warning signals to Hamas via mediators, who told the group that the military would respond if the mortar fire did not cease, according to Walla.

Five times on Wednesday, Israeli soldiers patrolling the border fence with Gaza were targeted by mortar fire emanating from the Gaza Strip, with Israeli tanks firing shells at Hamas posts in the Saja’iyya neighborhood of Gaza City. No injuries were reported.

The Israeli military confirmed that it had been conducting searches for secret Hamas tunnels at the border.

Israel has conducted similar activity since the end of the summer 2014 conflict, Ynet reports, but this was the first time Gazans responded violently. The army intends to continue the work, which is done on both sides of the border fence, and thus expects the low-scale shelling to continue for at least a few days, according to Ynet.

Troops had earlier reported hearing several explosions, with at least four confirmed mortar strikes. One mortar reportedly fell short and exploded within the Gaza Strip near the Saja’iyya neighborhood on the eastern side of Gaza city.

Earlier Wednesday, another mortar shell was fired towards Israeli troops who were completing engineering work near the border. No troops were injured in this incident and the army responded with tank fire targeting a Hamas observation point.

According to the Israeli Ynet news site, this is the first time mortar shells have been fired into Israeli territory since the end of the summer 2014 war.

On Tuesday, a sniper opened fire from the Saja’iyya neighborhood on a group of Israeli troops but did not hit any soldiers.

The mortar fire came a day after Israeli Prime Minister Benjamin Netanyahu visited the Gaza border region, where he examined the entrance of a recently discovered Hamas tunnel reaching into Israeli territory.

The Prime Minister’s visit was the first to the region since the discovery of the tunnel, the first reaching into Israeli territory to be uncovered since 2014’s Operation Protective Edge.

The Gaza tunnel has since been destroyed, although it was not immediately clear if the military simply sealed the tunnel or detonated it.