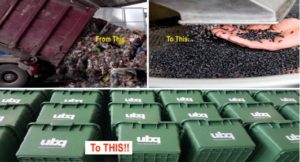 An Israeli greentech startup, founded by a fabled hummus maker, has signed a deal with a Virginia-based recycling authority.

The startup, UBQ, backed by Yehuda Pearl, the founder of popular hummus brand Sabra, has developed a technology that takes the 80 percent of the household garbage that is typically not recycled and turns it into a plastic substitute that can be made into everyday goods.

UBQ’s plastic is formed in a special closed-loop reactor system that uses no water and releases no harmful air emissions. For every ton of thermoplastic material produced, UBQ’s process prevents some 12 tons of CO2 equivalent from being created in landfills.

UBQ’s first partnership in the United States is a pilot program with the Central Virginia Waste Management Authority. CVWMA will offer 2,000 recycling bins made of UBQ material to its 1.5 million customers. The made-in-Israel bins are available on a first-come-first-served basis.

These recycling bins, made in Israel from UBQ material, are being used in Virginia. – Photo: courtesy

UBQ is short for “ubiquitous,” which is how the company hopes its technology will become. Virginia State Senator Tommy Torment called UBQ “a world-changing technology that has the potential to change the face of so many industries.”

UBQ’s technology breaks down household waste – consisting of roughly 80% organic material and 20% plastic – to a nearly molecular level. After the waste is dried and shredded, the UBQ reactor causes “natural components [to] reconstitute themselves and bind together into a new homogenous composite material,” UBQ chief executive Jack “Tato” Bigio told ISRAEL21c.

“We’re hopeful that within a few years, every Virginian will be able to dispose of their recycling in a UBQ bin and many more products will be made out of this remarkable material,” said Bigio.

UBQ has been granted worldwide patents for its material and process. The company has raised $27 million from private investors and from VC fund Battery Ventures.