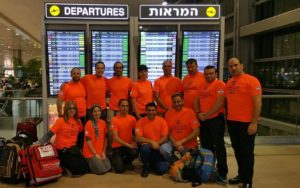 “Our role as volunteers will be to assist the community and to handle the situation as best we can in the absence of American officials, until their arrival,” explained delegation spokesman Moti Elmaliach.

“We will lead groups of residents on missions that will arise following Hurricane Irma, which is said to be the most powerful storm ever recorded in the Atlantic Ocean,” he added.

The Israelife Foundation has extensive experience in dispatching delegations to disaster areas. In 2015, the Foundation sent an emergency delegation to earthquake victims in Nepal. Members of this delegation set up field hospitals, treated local victims and Israeli tourists and assisted in locating the body of Or Assraf, an Israeli who perished in that earthquake.

Two weeks ago, the Foundation sent a delegation of psychiatrists and psychologists who volunteer at United Hatzalah to help the population in Texas in the wake of the floods caused by Hurricane Harvey.