Marom, who will be a featured speaker at the third Jerusalem Post Annual Conference in New York on Sunday, added that during his tenure as navy chief, from 2007 to 2011, “over 50 percent of the IDF’s operational activities were carried out by the navy.

“It’s hard to carry out a covert campaign with tanks and planes. Planes get picked up on radars and can be heard.

But ships can get almost anywhere.

There are states that are hard to reach covertly via air and land, but are accessible via the sea. Hence, the navy has a central role in this,” Marom said.

Asked to comment on the security situation on the Lebanese and Syrian fronts, the former navy chief noted that an alleged air strike on a Hezbollah convoy ferrying advanced weapons from Syria to Lebanon, attributed by international media reports to the Israel Air Force, touched off a series of attempts by Hezbollah to “settle scores” with Israel.

Hezbollah seems to have signaled that it has accomplished its goal with the latest attack, which wounded four members of an army patrol on the Golan border on March 18, he added. 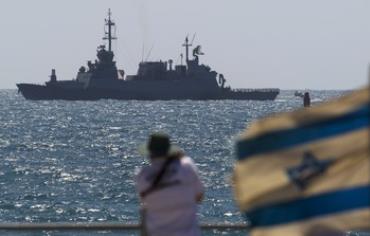 “Five of the alleged air strikes [on advanced weapons in recent years] were reportedly on Syrian territory, and the weapons that were attacked were in the possession of the Syrian army. The latest attack on a weapons transit, if Israel carried it out, targeted arms in Hezbollah’s possession.

This changes things. For [Syrian President Basher] Assad, there is a sphere of deniability when attacks occur on his territory. He can always blame the rebels.

Assad has no interest in confronting us, he is busy with the rebels. With Hezbollah, it’s a different story. This is a terrorist organization that cannot allow itself to not respond to strikes on it. Its justification for its existence is resistance to Israel. Also, Hezbollah is Iran,” Marom explained.

If Israel was indeed behind the air strikes, those who ordered it would likely have assumed that a direct strike on Hezbollah is different from previous alleged air strikes in Syria, he added.

“Hezbollah has many possibilities when it comes to responding. They have the Syrian border, the Lebanese border, and the option of attacks abroad. Now, after three border attacks, Hezbollah feels that the score is tied. From their perspective, they settled accounts,” Marom said.

Hezbollah chief Hassan Nasrallah alluded to this stance during his televised speech on Saturday, in which he said he is not seeking war with Israel.

Hezbollah maintains control of weapons storehouses in Syria, and periodically attempts to exploit conditions such as bad weather to move arms into Lebanon.

Israel must disrupt such attempts, whatever the consequences, Marom said.

“Israel must be determined enough to act if necessary.

It’s unacceptable for Hezbollah to possess antiship and anti-aircraft missiles.

Hezbollah has no interest in launching a war against Israel now, and it will think twice before transferring advanced weapons into Lebanon,” he said.

“If a confrontation with terror organizations erupts, they must have fewer quality weapons,” Marom said.

Since the Yom Kippur War in 1973, Arab states have understood that Israel’s presence in the Middle East is permanent, and today, instead of the threat of invasion, Israel must deal with terrorist proxies set up by Iran and Syria on its borders, he said.

Hezbollah’s arsenal of 100,000 projectiles is an attempt by Iran and Syria to produce a “balance of terror” with Israel and target its soft underbelly – the civilian home front, he continued.

Iran’s nuclear program remains the most severe security threat by far, he said. Since the nuclear project is linked to the Islamic Republic’s efforts to strengthen its proxies, Israel has no choice but to work against both threats, preferably in a way that does not “light a bigger fire, while safeguarding security,” Marom said.