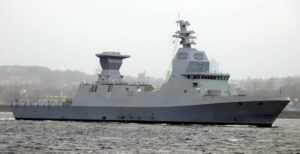 At the conclusion of a long process of construction and extensive preparation in Germany, the new Saar 6 warship will run up the Israeli flag on Wednesday as it is officially transferred to the Israeli navy. It will then set out on a journey that will end with its renaming as INS Magen in its new home in the Haifa base.

The missile ship INS Magen is one of the four new Saar 6 corvettes whose purpose includes protecting Israeli gas rigs and also more broadly to protect Israel’s maritime interests and police its naval borders, an area double the land mass of Israel. 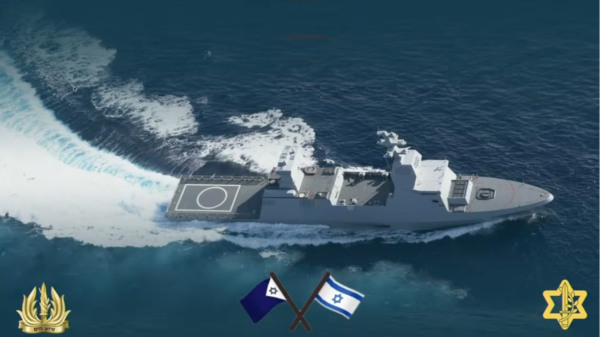 Speaking on Galei Tzahal this morning, General (Res.) David Ben Besht, formerly the Navy Commander, welcomed the acquisition of these new ships. “These ships are simply marvelous; they answer precisely to Israel’s needs, given the existing threats from Lebanon and Syria,” he said.

Over the years, the Israeli naval command had been considering a variety of options for combating its naval threats, until they finally reached a decision. “The optimum mode of protection over our naval assets is via such ships, and the Saar 6 ship is an excellent response to our operational needs,” General Sharvit said.

The new Saar 6 ships were specially designed for the mission of protecting Israel’s gas rigs as well as the naval trade routes. All operational and combat systems, from the radars to the weapons, were designed with the ships’ specific tasks in mind. They will have improved means of identifying and monitoring targets that will enable them to compile a broad picture of the threats they are facing, intercept cruise missiles, and attack long-range target with advanced sea-to-sea missiles.

STATUS UPDATE: We just leveled up our fleet. pic.twitter.com/uWEJVsDaFw

The Saar 6 ships are also capable of remaining at sea for extended periods, far longer than regular missile ships, and of dominating larger areas. They are also large enough to have a medium-sized helicopter land on board.

In order to realize the vision developed over a number of years, three engineers traveled to Germany in 2015 in order to participate in the design of the naval craft that would serve the Israeli navy for the next 30 years. In 2017, after many tests and adaptations finally leading to the current design, the construction began on the first INS Magen missile ship.

“When the INS Magen missile ship reaches Israeli shores, it will have all its weapons systems installed, 90% of which are Israeli-made – a process that will take around a year and a half. Once the weapons systems are installed, the INS Magen will become fully operational and will lead defense missions for Israel’s naval assets and strategic operations,” concluded General Sharvit.