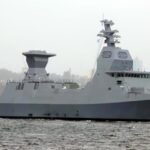 Since the newest Sa’ar 6 missile corvettes will have to deal with Hezbollah’s radar-guided shore-to-sea missiles, engineers redesigned it with a low radar signature.

When German engineers from ThyssenKrupp Marine Systems, who are building Israel’s next-generation Sa’ar-6 class missile corvette, showed Israel Navy engineers the first blueprints for the strategically vital vessel, the Israelis realized there was a problem.

The plans outlined a ship based on Germany’s own sea platforms, and was similar in design. Yet Israel must deal with a far more challenging environment, in which Hezbollah is stockpiling radar-guided shore-to-sea missiles that can target the navy, offshore gas drilling rigs in the Mediterranean and strategically vital sites, such as civilian sea ports – just the type of threat the Sa’ar-6 will be designed to counter. Continue Reading »