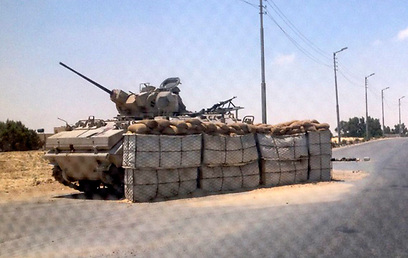 The battalions are expected to deploy in the El-Arish and Rafah sectors as part of the effort to quell the increased Islamist terrorist activity, which included an attempt on the life of a senior military official.

The infantry battalions will enter Sinai to support the armored, engineering and special forces that are already operating there, with Israel’s authorization. Cairo fears the situation in Sinai will deteriorate further following the Muslim Brotherhood’s fall from power.

On Sunday Egyptian exchanges of fire took place on the Egyptian side of the border with Israel, apparently between Egyptian army forces and armed terrorists.

An Egyptian security official said Monday that the army has destroyed more than 90% of the smuggling tunnels running under the Gaza-Egypt border. The official told the Egyptian news agency Asharq Al-Awsat that security forces plan to continue with their efforts to rid Sinai of all armed criminal elements.

The Egyptian army also said it would respond with the “utmost severity and firmness and force” if protesters tried to approach or break into its bases.

Thousands of Islamist supporters of deposed President Morsi were demonstrating on Monday to demand his return to power. At least 92 people were killed in the days after the army toppled Morsi on July 3 although protests have been peaceful for the past week.

Tamarod, the main activist group that organized the protests against Morsi, called for the suspension of the Camp David accords signed between Israel and Egypt in case Israel and the international forces will restrict the Egyptian army’s deployment in Sinai.

According to the movement, the restrictions specified in the peace agreement’s provisions are preventing Cairo from regaining its sovereignty in Sinai and making it difficult for the army to clear terrorist elements from the area.

Also on Monday, a senior US diplomat urged Egypt’s military and new interim leadership to ensure an “inclusive” transition to democracy, dismissing accusations that Washington backs any one side in the deeply polarized country. 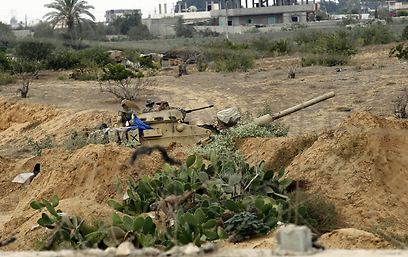 Deputy Secretary of State William Burns was making the highest level visit to Egypt by an American official since Islamist President Mohamed Morsi was overthrown by the military on July 3, following days of mass protests.

Morsi’s opponents have long accused the United States of backing the Islamist president during his year in office. Tamarod said it refused an invitation to meet with Burns because of the perceived US stance.

On the other side, Morsi’s backers, including the Muslim Brotherhood, now accuse Washington of backing the coup against Egypt’s first freely elected president.

Burns held talks Monday with Egypt’s interim President Adly Mansour, Prime Minister-designate Hazem el-Beblawi and the head of the military, Gen. Abdel-Fattah al-Sissi, concerning the transition plan put forward by the new leadership. The road map calls for the amending of the Islamist-drafted constitution passed under Morsi and then parliamentary and presidential elections early next year.

In a further signal Washington is moving on from Morsi, Burns said that the US is “firmly committed to helping Egypt succeed in this second chance” to realize the promises of creating a democratic state.

“We hope it will be a chance to learn some of the lessons and correct some of the mistakes of the last two years,” he said.

Burns told reporters afterward that the process, particularly the constitutional changes, should be “transparent and inclusive” and that no party should be excluded – a clear call for the Brotherhood to be involved.

“If representatives of some of the largest parties in Egypt are detained or excluded, how are dialogue and participation possible?” Burns said, referring to the Brotherhood.

So far, the Brotherhood has staunchly rejected participating in the new political process, saying it will not validate what it calls the illegal ouster of Morsi. At the same time, authorities have launched a crackdown on its top leadership, putting Morsi and five others in detention and issuing arrest warrants against others.

The interim leadership has said it wants to offer the Brotherhood’s political party posts in the Cabinet it is putting together, but the group has refused.

Burns said he had called on the military to “avoid any politically-motivated arrests.”

The military did not comment on the talks, beyond saying in a statement that Burns and al-Sissi discussed “the recent political developments in Egypt … and ways to reinforce cooperation.”

Burns dismissed accusation that the US has taken sides in Egypt, saying it is not Washington’s policy, “as outsiders, to support particular political personalities and particular parties. … What we’re going to continue to try to do is to support an open inclusive, tolerant democratic process.”

“I am not naive. I know that many Egyptians have doubts about the United States, and I know there will be nothing neat or easy about the road ahead,” he said.

During anti-Morsi rallies, protesters denounced Washington, depicting it as the main backer of his rule and the political rise of the Brotherhood. Posters at rallies showed President Barack Obama with a beard like those of Islamist politicians.

Burns, the No. 2 American diplomat, is also expected to meet with civil society groups and business leaders during his trip.

Tamarod said on its Facebook page that it turned down an invitation to meet Burns.

“What is your business with Egypt? Stick with the Brotherhood and show me what good they are (to you),” one of Tamarod’s founders, Mahmoud Badr, said sarcastically in a posting.

From the other side, an official with the Muslim Brotherhood said he was not aware of any invitation for the group to meet with Burns. But the official, Saad Emara, said any talks would have to recognize the Brotherhood’s demand for Morsi’s reinstatement – not about a post-Morsi political process.

“Our bottom line is the constitutional legitimacy,” he told The Associated Press. “We won’t talk about post-coup details.” Morsi’s backers accuse the United States, at the least, of acceding to the military’s coup.