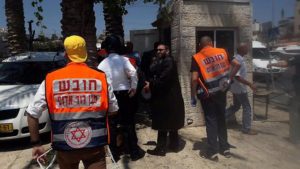 A police spokesman said a woman armed with a knife approached the man, 31, at a light rail station near the Damascus Gate on the corner of Bar Lev and Sultan Suleiman streets and stabbed him in the shoulder.

A Border Police force stationed nearby saw the incident, tackled the terrorist and arrested her.

The knife used by Palestinian terrorist in the attack on unarmed civilian man in Jerusalem – Photo: Israel Police

The injured man was treated by Magen David Adom paramedics and evacuated to a nearby hospital with light wounds.

Israel’s TV2 NEWS reported that before the Palestinian terrorist stabbed the Jewish man at a light rail station near the Damascus Gate, where she was caught and arrested, she had earlier stabbed a Christian Arab from Nazareth, who was also taken to hospital and treated.

Jerusalem stabbing attack: CCTV footage showing the attack, along with the @IL_police raid of the terrorist’s house, who was arrested pic.twitter.com/OmNFmsUQ3H