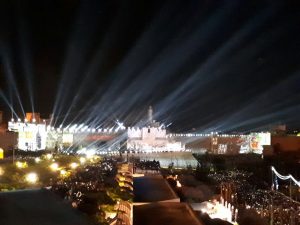 According to the Jordanian government’s announcement, this is a blatant Israeli attack by allowing extremists to “storm” the Al-Aqsa Mosque in what is termed “a desecration of the sanctity of the place and an insult to the feelings of Muslims all over the world, reported Ynet.

“The Jordanian government places on the government of Israel, as the occupying power, responsibility for harming the Al-Aqsa Mosque and encouraging the settlers to defile the mosque’s chambers, and the responsibility for not stopping the calls of incitement by some members of the Israeli government and Knesset members,” he said.

Jordanian government spokesman Muhammad al-Mumini warned of the consequences of Israel’s disregard of the holy sites of Islam, international laws, and the peace treaty signed with Jordan. He stressed Jordan’s firm stance on the preservation of the Al-Aqsa Mosque and opposition to any attempt to change its historical status: “The Al-Aqsa Mosque is a place of absolute worship for Muslims alone, and no other interpretation will be accepted.”

Al-Momani added that Jordan would use all its legal and diplomatic options to protect the holy sites, Waqf employees in Jerusalem, and those praying in the mosque.

Yesterday, about 75,000 people participated in the traditional flag dance in the Old City of Jerusalem as part of the Jerusalem Day celebrations and 50 years since the unification and liberation of the city. The marchers left the city center for the Old City. At Tzahal Square they split to Jaffa Gate while some of them marched through the Damascus Gate towards the Western Wall through the Muslim Quarter.

At noon, a confrontation broke out between left-wing activists who tried to prevent the march from crossing into the Muslim quarter, but were evacuated by Border Police forces.