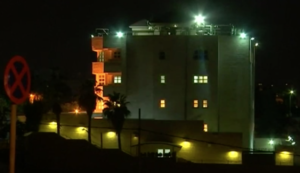 Israel’s PM Netanyahu embraces Ziv, a guard at the Israeli embassy in Jordan who fatally shot 2 locals after being attacked with a screwdriver. – Photo: Haim Tzach/GPO

According to a statement provided to the official Petra news agency by Dr. Mohammad Al Momani, Minister of State for Media Affairs, Israel also vowed to follow up legal proceedings against the guard, known only as Ziv.

It was not clear if this meant laying charges against him.

The most serious crisis between the two countries was sparked on July 23 last year, when 17-year-old Mohammed Jawawdeh was shot dead by the head of security at Israel’s embassy in Amman during what Jordan described a row over the late delivery of furniture.

A local doctor and the landlord of Ziv’s residence, Bashar Hamarneh, was also killed by stray gunfire.

Ziv reportedly told police that upon discovering he was Israeli, Jawawdeh drew a screwdriver and began trying to stab him in the neck.

Jordanian officials were enraged when Ziv received a hero’s welcome in Israel following a diplomatic stand-off which saw the Israeli mission in its eastern neighbor closed and diplomats kicked out.

Jordan has repeatedly insisted that Israel must put the security official on trial before an ambassador can return to Amman.

Jordan and Israel signed a peace treaty in 1994, and despite often tense relations, Israel considers the country to be a stable bulwark against radical elements penetrating its long eastern border.