Jordanian lawmaker asks Jordanians to martyr themselves against gas deal 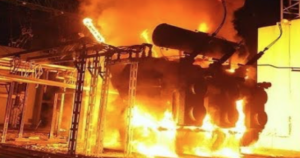 Prior to the electrical equipment of Israel-Jordan gas-line being torched yesterday in protest to the upcoming import of natural gas from Israel, Jordanian parliamentarian Tariq Khoury demanded, “Every free man in Jordan must sacrifice himself and his children to blow up a gas line that passes through Jordanian territory, we are all martyrs of the project.”

Two electrical transformers servicing a gas transfer station intended to transport gas from the Leviathan natural gas field in Israel into Jordan were torched by unidentified people in Irbid in northern Jordan on Saturday.

According to Sky News Arabia, this is not the first attack against the gas transfer station in Irbid. Gas flow through the station is expected to start in the next few days.

Electrical transformers servicing a gas transfer station intended to transport #NaturalGas from #Israel into #Jordan were torched by unidentified people, as Jordanians protest a gas trade deal between the two nations. https://t.co/Lr9xOajl4m

Jordanian citizens and politicians have protested the planned transfer of gas between the two nations.

On Sunday, Jordan’s parliament filed an urgent memo, requesting that a law be drafted to ban the import of gas from Israel, according to Asharq Al-Awsat.

Dozens of activists held a protest in front of the parliament, calling for a cancellation of the gas trade deal.

Jordan’s National Electric Power Company (NEPCO) signed a 15-year agreement with Noble Energy to purchase $10 billion worth of natural gas in September 2016. The Constitutional Court in Jordan ruled that the deal doesn’t need to be approved by the Jordanian parliament.

In March, the Jordanian House of Representatives declared its “utter rejection” of the deal and requested that it be “canceled at any cost.”

In July, Jordanian parliamentarian Tariq Khoury called on Jordanians to “sign a code of honor to blow up the gas pipeline from Israel to the land of Jordan,” according to the Palestinian Quds news agency.

“Every free man in Jordan must sacrifice himself and his children to blow up a gas line that passes through Jordanian territory, we are all martyrs of the project,” said Khoury in a speech during a press conference to reveal details about the gas agreement.

The Jordanian parliamentarian spoke on the sidelines of a press conference held by MP Saleh Al-Armounti revealing information about the gas agreement and discussing “misinformation” by the Jordanian government about the deal.

Israel has made agreements to export natural gas to both Jordan and Egypt.

Hedy Cohen/Globes and Eytan Halon contributed to this report.